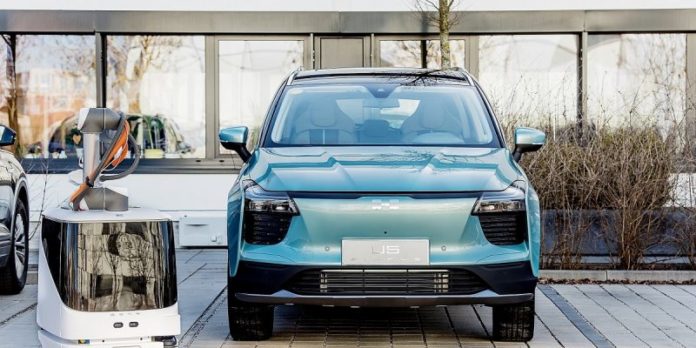 The Shanghai automaker’s entry into this nascent market follows Volkswagen’s own plans announced in December where it hopes development of the robots could accelerate urban take-up of BEVs, reports TU Automotive.

Now Aiways says it has been granted seven patents across Europe and China to develop its autonomous charging robot, including the intelligent robot design and charging method. The device, dubbed ‘CARL’, also seeks to address one of the major stumbling blocks to EV ownership in cities.

Developed with 30kwh and 60kwh capacities, the robot claims to provide a fast charge to any EV with a recognized charging standard. Claiming the ability of recharging an EV battery to 80% in under 50 minutes, the robot attempt to offer a flexible and economical charging solution to private and corporate customers, as well as infrastructure developers and operators.

Mirroring the VW proposed system, Aiways version is aimed at consumers who, having parked their vehicle in public, home or workplace car parks, can summon a robot located nearby via a smartphone app and then walkaway. The robot will use GPS data to locate the vehicle within the area in which it operates, plug in and start charging it automatically. Once the charging process is complete, it will continue to the next user or return to its base station.

Alex Klose, vice-president for overseas operations at Aiways, said: “Instead of drivers trying to find a charger, the charger will find them. We want to make EV ownership as simple, easy and enjoyable as possible, and CARL provides a blueprint for how EVs can be charged in the future.”