The voltaic pile, invented by Alessandro Volta in 1800, was the first electric battery. Its invention can be traced back to an argument between Volta and Luigi Galvani, Volta’s fellow Italian scientist who had gained notoriety for his experiments on frog legs.

Galvani found that the legs of a frog would contract when forming a circuit with two different kinds of metal. 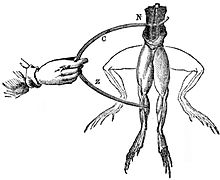 Galvani contended that this phenomenon resulted from an inherent “animal electricity,” an electrical fluid present in the animal itself. Volta disagreed. His own experiments proved that this electric stimulation was ultimately the result of the different metals in the circuit and the electrolyte – that is, the frog legs – between them.

Removing this experiment from the theater of twitching legs, Volta created a circuit with two different metals separated by a piece of cloth or cardboard soaked in brine (an electrolyte). 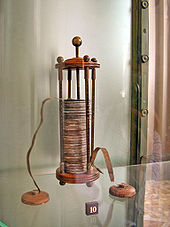 Volta demonstrated in 1794 that when the two metals and brine-soaked cloth or cardboard are arranged in a circuit they produce an electric current. In 1800, Volta stacked several pairs of alternating copper (or silver) and zinc discs (electrodes) separated by cloth or cardboard soaked in brine (electrolyte) to increase the electrolyte conductivity. When the top and bottom contacts were connected by a wire, an electric current flowed through the voltaic pile and the connecting wire.

APPLICATIONS
On 20 March 1800, Alessandro Volta wrote to the London Royal Society to describe the technique for producing electric current using his device. On learning of the voltaic pile, William Nicholson and Anthony Carlisle used it to discover the electrolysis of water. Humphry Davy showed that the electromotive force, which drives the electric current through a circuit containing a single voltaic cell, was caused by a chemical reaction, not by the voltage difference between the two metals. He also used the voltaic pile to decompose chemicals and to produce new chemicals. William Hyde Wollaston showed that electricity from voltaic piles had identical effects to those of electricity produced by friction. In 1802 Vasily Petrov used voltaic piles in the discovery and research of electric arc effects.

Humphry Davy and Andrew Crosse were among the first to develop large voltaic piles. Davy used a 2000-pair pile made for the Royal Institution in 1808 to demonstrate carbon arc discharge and isolate five new elements: barium, calcium, boron, strontium and magnesium.

ELECTROCHEMISTRY
Because Volta believed that the electromotive force occurred at the contact between the two metals, Volta’s piles had a different design than the modern design illustrated on this page. His piles had one extra disc of copper at the top, in contact with the zinc, and one extra disc of zinc at the bottom, in contact with the copper. Expanding on Volta’s work and the electro-magnetism work of his mentor Humphry Davy, Michael Faraday utilized both magnets and the voltaic pile in his experiments with electricity. Faraday believed that all “electricities” being studied at the time (voltaic, magnetic, thermal, and animal) were one and the same. His work to prove this theory led him to propose two laws of electrochemistry which stood in direct conflict with the current scientific beliefs of the day as laid down by Volta thirty years earlier. Because of their contributions to the understanding of this field of study, Faraday and Volta are both considered to be among the fathers of electrochemistry. The words “electrode” and “electrolyte”, used above to describe Volta’s work, are due to Faraday.

DRY PILE
A number of high-voltage dry piles were invented between the early 19th century and the 1830s in an attempt to determine the source of electricity of the wet voltaic pile, and specifically to support Volta’s hypothesis of contact tension. Indeed, Volta himself experimented with a pile whose cardboard discs had dried out, most likely accidentally.

The first to publish was Johann Wilhelm Ritter in 1802, albeit in an obscure journal, but over the next decade, it was announced repeatedly as a new discovery. One form of dry pile is the Zamboni pile. Francis Ronalds in 1814 was one of the first to realize that dry piles also worked through chemical reaction rather than metal to metal contact, even though corrosion was not visible due to the very small currents generated.

The dry pile could be referred to as the ancestor of the modern dry cell.