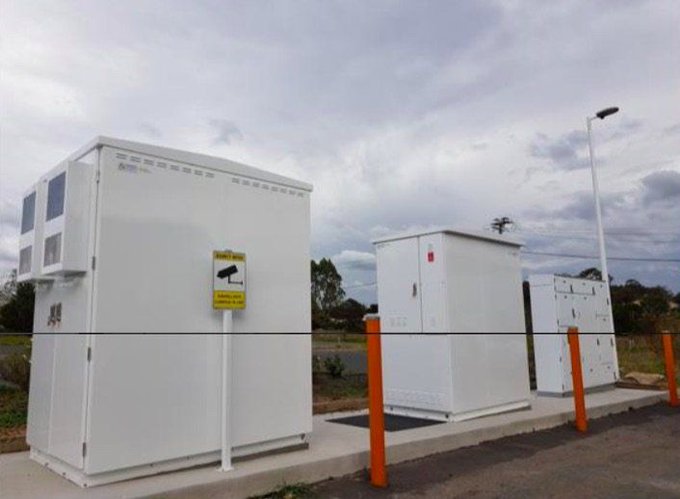 Australian fast charging company ChargeFox has installed a sizeable battery installation in Goulburn (a regional city in the Southern Tablelands of the state of New South Wales) to support its new ultra-rapid electric vehicle charger, as well as earning income from providing frequency services to the grid, and saving money by avoiding a grid upgrade, reports The Driven.
The 250kW/273kWh battery, using LG-Chem cells and Vacon inverters, has been designed and installed by PowerTec Telecommunications, and is the second time that ChargeFox has chosen a battery as a cheaper alternative to upgrading the permanent power supply at a charging site.
“In Goulburn we have a 180kW connection to the grid, which powers about 30kW of constant load at the service station, leaving 150kW for the chargers. We’ve installed 750kW of Tritium chargers there, with about 50kW of solar coming,” says Evan Beaver, head of charging at ChargeFox.
“The battery is 250kW/273kWh, and monitors the grid supply, the petrol station load and the charger demand and lops the demand peaks. Using the battery in this primary function is cost effective against a 500kW grid connection upgrade and worth doing on its own. Adding solar to this mix lowers the cost of charging the battery.”
Beaver says the battery can operate for about one hour at full power, but has the ability to change power quickly and respond automatically to grid disturbances, That makes it perfect for the FCAS market, which it will offer as a secondary function.
“So using  a battery in Goulburn has reduced our installation costs, reduced charging site electrical costs, increased the use of renewables and improved grid stability,” Beaver says. “The costs are a touch high to use them everywhere right now, but I can see batteries getting used in this way more and more in coming years.”