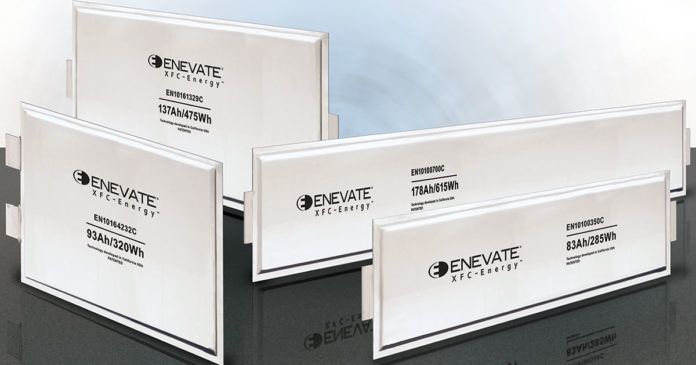 Battery makers have for years been trying to replace the graphite anode in lithium-ion batteries with a version made of silicon, which would give electric vehicles a much longer range. Some batteries with silicon anodes are getting close to market for wearables and electronics. The recipes for these silicon-rich anodes that a handful of companies are developing typically use silicon oxide or a mix of silicon and carbon.

But Irvine, CA-based Enevate is using an engineered porous film made mainly of pure silicon. In addition to being inexpensive, the new anode material, which founder and chief technology officer Benjamin Park has spent more than 10 years developing, will lead to an electric vehicle (EV) that has 30 percent more range on a single charge than today’s EVs. What’s more, the battery Enevate envisions could be charged up enough in five minutes to deliver 400 km of driving range.

Big names in the battery and automotive business are listening. Carmakers Renault, Nissan, and Mitsubishi, as well as battery-makers LG Chem and Samsung, are investors. And lithium battery pioneer and 2019 Chemistry Nobel Prize winner John Goodenough is on the company’s Advisory Board.

When lithium-ion batteries are charged, lithium ions move from the cathode to the anode. The more ions the anode can hold, the higher its energy capacity, and the longer the battery can run. Silicon can in theory hold ten times the energy of graphite. But it also expands and contracts dramatically, falling apart after a few charge cycles.

To get around that, battery makers such as Tesla today add just a tiny bit of silicon to graphite powder. The powder is mixed with a glue-like plastic called a binder and is coated on a thin copper foil to make the anode. But, says Park, lithium ions react with silicon first, before graphite. “The silicon still expands quite a bit, and that plastic binder is weak,” he says, explaining that the whole electrode is more likely to degrade as the amount of silicon is ramped up.

Enevate does not use plastic binders. Instead, its patented process creates the porous 10- to 60-µm-thick silicon film directly on a copper foil. The cherry on top is a nanometers-thick protective coating, which, says Park, “prevents the silicon from reacting with the electrolyte.” That type of reaction can also damage a battery.

The process does not require high-quality silicon, so anodes of this type cost less than their graphite counterparts of the same capacity. And because the material is mostly silicon, lithium ions can slip in and out very quickly, charging the battery to 75 percent of its capacity in five minutes, without causing much expansion. Park likens it to a high-capacity movie theater. “If you have a full movie theater it takes a long time to find the one empty seat. We have a theater with ten times more capacity. Even if we fill that theater halfway, [it still doesn’t take long] to find empty seats.”

The company’s roll-to-roll processing techniques can make silicon anodes quickly enough for high-volume manufacturing, says Park. By coupling the silicon anode with conventional cathode materials such as nickel-manganese-cobalt, they have made battery cells with energy densities as high as 350 watt-hours per kilogram, which is about 30 percent more than the specific energy of today’s lithium-ion batteries. Enevate says it is now working with multiple major automotive companies to develop standard-size battery cells for 2024-25 model year EVs.