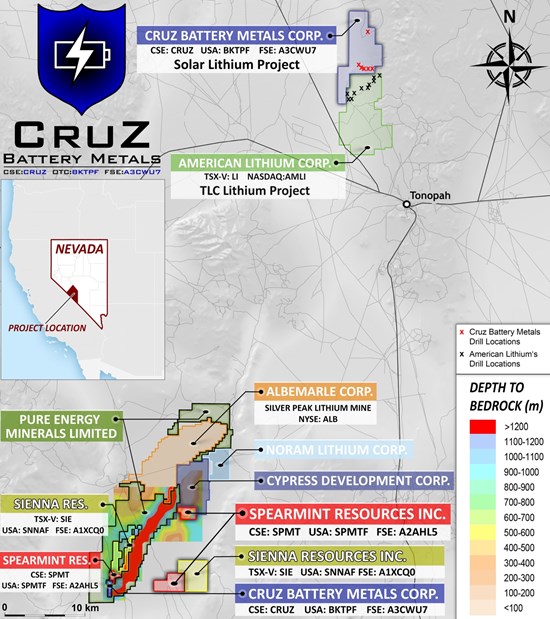 Cruz Battery Metals Corp. has announced the Company has contracted Harris Exploration Drilling and Associates Inc. (“Harris”) to begin a Phase-3 drill program shortly on the 100-percent owned, 8,135-acre Solar Lithium Project in Nevada, directly bordering American Lithium Corp.’s TLC project. The Company has already received approval from the Bureau of Land Management (BLM) for up to 22 additional holes. To date, every hole drilled on the ‘Solar Lithium Project’ has discovered lithium, including values as high as 1,300 ppm Li (announced on January 17, 2022).

Jim Nelson, President of Cruz Battery Metals stated, “We are pleased to be working again with Harris Exploration Drilling for our phase-3 drill program on the 8,135-acre Solar Lithium Project in Nevada, comprising a large footprint directly bordering American Lithium. Harris performed the drilling during our phase I and II drill programs that discovered the presence of lithium in all 6 holes drilled to date. Our neighbor, American Lithium Corp., was recently uplisted to the NASDAQ and has also recently announced a substantial increase to their resource estimate. We couldn’t be more optimistic about the future of the Solar Lithium Project. Cruz’s goal is to locate and provide a new, domestically sourced, battery grade lithium deposit. Considering that Cruz is well-funded with $3.5 million in the treasury, the fact the lithium prices continue to show strength, and that Cruz will be coming into an active news cycle period, management feels that everything is now in place to give our shareholders the best chance of success on this project.“