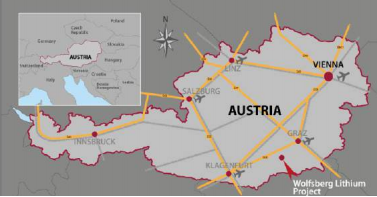 On 5 March 2020, the Company announced that it had agreed to draw down A$2.0m (2,000 convertible notes) under the Winance facility (Tranche 2). The notes were issued on 10 March 2020. However Tranche 2 funding was delayed due to COVID-19, and as a result, the notes were held in escrow pending receipt of funds. On 2 June 2020, the Company announced that it had received A$1.0m under Tranche 2.

The Company is very pleased to confirm that the final A$1.0m has been received under Tranche 2 and as a result the final 1,000 notes have been released from escrow.

Tony Sage, Chairman, commented “We are pleased that Winance are continuing to support the Wolfsberg Lithium Project, which is located in Carinthia, 270km south of Vienna, Austria. We have now drawn down $4m of the $10m facility. We are also pleased that Winance continue to hold their shares in EUR”.

Waqas Ibrahim, CFO of Winance, commented “We are as excited now as we were 18 months ago when we first invested in the Wolfsberg Lithium Project. We are committed to provide continuous support to European Lithium over a long-term”. Full terms of the notes are set out in the Company’s notice of annual general meeting announced 8 October 2019.