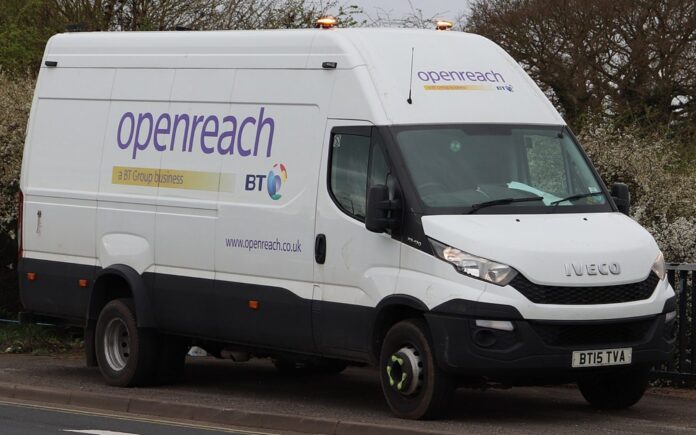 BT Group, which has almost 34,000 vehicles, including more than 28,000 vans used by Openreach engineers, has partnered with the Climate Group to create the UK Electric Fleets Alliance, a coalition designed to campaign for the acceleration of the transition to zero emission motoring.

Leverage purchasing power
Second only to the national postal service in fleet size, BT wants to use its purchasing power to send a powerful message to vehicle manufacturers demanding change. The company has trialled a small fleet of electric vans and is looking to deploy more this year; while also investigating options for medium sized EVs for deployment later in the year. However, a BT spokesman said the company had faced two main challenges to electrifying its fleet.

“The availability of commercial EVs: at present there are limited options as manufacturers concentrate on left-hand drive models for their EU markets. This is changing and we’re hoping that we’ll see more models and choice appear later in the year,” he said.

“We’ve [also] had to consider how our engineers can charge their vehicles at home, at an Openreach building and make use of public charging network points – where available.”

Government action required
He added that the UK Electric Fleets Alliance is now exploring a range of options to facilitate the transition to electric vehicles, including government support for manufacturers to accelerate the release and development of EVs; the continuation of both purchase grants to offset the higher cost of electric vehicles and subsidies for recharging installations until price parity is reached; and an extension of incentives for electric vans.

The alliance would also like to see significant investment in the UK’s recharging infrastructure, such as fast charging, access to overnight charging, and the roll out of chargers to areas where the commercial case is harder to make.

Clive Selley, CEO, Openreach said: “With the country’s second largest fleet of vans, I want Openreach to play a leading role in the UK’s transition to low carbon vehicles. But there are still some major hurdles to overcome. For example, the kinds of vehicles, scale of manufacturing, supply-chains and infrastructure needed to electrify large fleets like ours simply doesn’t exist today. So we need Government support to make the transition faster and fuller, and the commitment to maintaining plug-in grants is a welcome first step.”

Since 2016/17, BT has reduced the carbon emissions intensity of its operations by 42%, and has pledged to become a net zero carbon emissions business by 2045. The company is the joint-largest private purchaser of electricity in the UK – 100% of the electricity that it purchases directly from UK energy suppliers comes from renewable sources.

EV100, The Climate Group’s global electric vehicles initiative, has reported a number of new fleet supporters committing to zero emission motoring by 2030. New EV100 partners include building materials and construction company Tarmac, which is converting its 2,000 strong car and van fleet to battery power, as well as installing charging infrastructure for employees and customers at its corporate locations across the UK; energy supplier OVO, which is transitioning its fleet to EVs and installing charging infrastructure at its work locations to support EV uptake by employees; and Rentokil Initial, which has also committed to switch its European fleet to electric by 2030.

He also wants to fully electrify Rentokil’s vehicle fleet in North America and all other markets, but added that: “Improvements in local government policies and the EV market landscape will be required.”

Helen Clarkson, CEO of The Climate Group, said these fleet commitments demonstrated: “The collective will for ambitious EV policies and the need for this demand to be met by manufacturers. As the UK looks ahead to hosting COP26 in 2021, corporate support for the transition to electric vehicles is more important than ever. Major companies signing up to EV100 send a strong demand signal to the UK government that British business is ready to accelerate the clean energy transition.”