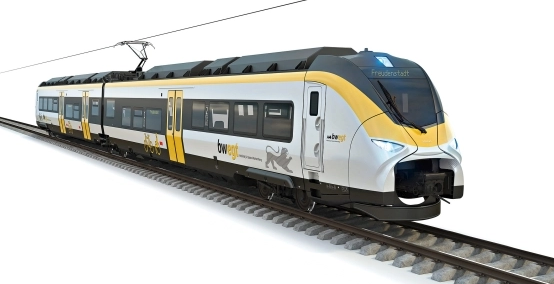 The Baden-Württemberg State Railway Authority (SFBW) has ordered 20 Mireo Plus B battery-electric trains from Siemens Mobility. The trains, which will be used around Ortenau, are scheduled for delivery by December 2023.

The Mireo Plus B is a two-part electric multiple unit with 120 seats each. They have both a pantograph and a traction battery. This allows them to run on lines with and without overhead lines – the range of the battery electric drive is 80 kilometers according to the manufacturer’s information. The battery, which is installed in two containers under the train, is charged by recuperation during braking or via the overhead line.

The 20 vehicles are to be used in regional rail transport on the 8 Ortenau network. This network covers the lines Offenburg – Freudenstadt/Hornberg, Offenburg – Bad Griesbach, Offenburg – Achern, Achern – Ottenhöfen and Biberach (Baden) – Oberharmersbach-Riersbach. Delivery is scheduled to take place by December 2023. According to the announcement, Siemens will also take over maintenance for 29.5 years.

According to Winfried Hermann (Greens), Baden-Württemberg’s Minister of Transportation, Siemens will also assume the entire energy costs for the aforementioned period. “In the interest of sustainability, we have consciously opted for the ‘life cycle model’,” Hermann is quoted in the press release. “As we are breaking new ground in the conversion to climate-friendly drive technologies in local transport with the introduction of this new technology and consciously want to make companies responsible for this technology by drawing up contracts”.

The acquisition is also contractually specific, and the communication refers to the “Netz-Ortenau model”. The SFBW, as the state authority, will purchase the trains and thus become the owner of the vehicles. Siemens as the manufacturer also guarantees permanent operational readiness via the maintenance contract. The SFBW then places the vehicles at the disposal of the railroad company that operates the trains on a day-to-day basis for the duration of the transport contract.

The financing of the trains built at the Siemens plant in Krefeld in the amount of EUR 77 million is being provided by KfW IPEX-Bank and has a term of 28 years. “The financing not only contributes to a direct reduction in CO2 emissions, but also to the promotion of innovative and climate-friendly technologies in rail transport,” says Andreas Ufer, Managing Director of KfW IPEX-Bank.