Bulgana Green Power Hub is a wind farm under construction north of Stawell in the Australian state of Victoria. The first production has been spotted from the 194MW Bulgana wind farm – the much delayed project that will form a key part of what will be the biggest wind and battery hub in Victoria, reports Reneweconomy.com.au.

The Bulgana Green Power Hub will combine the output of the wind farm and a 20MW/34MWh Tesla big battery to provide a 100 per cent renewable energy supply to the proposed giant greenhouse to be built by Nectar Farms. It will also inject a significant amount of supply into the main grid.

Nectar Farms is an agri-business dedicated to transforming the current Australian farming model through promotion of glasshouse farming. Nectar Farms is rolling out a series of glasshouse projects to become the market-leader in ‘Smart Farming’, delivering high-yield premium horticulture produce whilst providing modern industrialized agriculture opportunities for regional Australia. 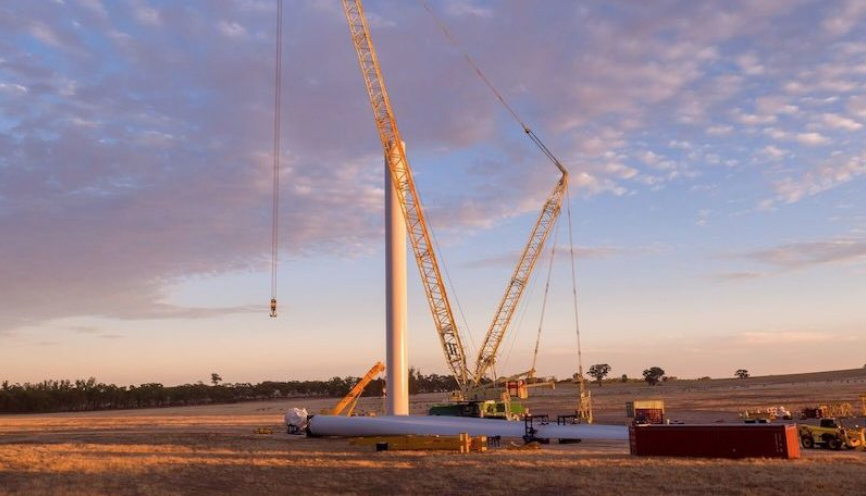 However, the Bulgana wind farm has been one a dozen new projects that has had its connection and commissioning delayed by the growing grid congestion in north-west Victoria, where new connections were halted after problems emerged with voltage control, resulting in five big solar farms having their output cut in half for more than seven months.

That has caused problems and revenue losses for both the owner, the French group Neoen, and the project’s EPC contractor. Neoen is a renewable energy company headquartered in Paris. It owns and operates solar and wind farms in 13 countries on four continents. Neoen had passed on some of the revenue losses to its contractor under so-called Liquidated Damages, but these contracts tend to have “caps”, which means the owner ends up taking losses itself if the delay is substantial.

Bulgana’s most recent construction update indicated that only one out of 56 turbines has been completed, and it is thought that the construction, connection and commissioning process may not be complete much before the end of the year.