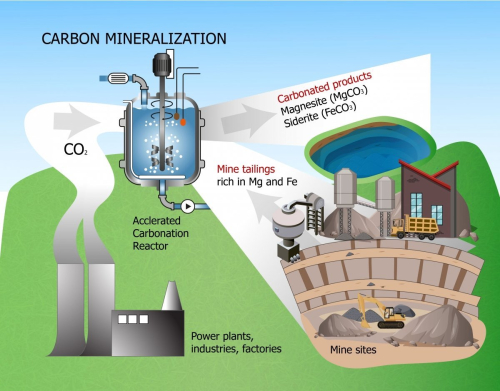 In addition to reducing carbon dioxide in the atmosphere, the Michigan Tech project aims to extract energy-relevant metals from silicate minerals for battery manufacturing.

The DOE awarded grants to develop rapid carbon mineralization and critical mineral extraction technology to 16 projects nationwide, totaling $39 million. Michigan Tech’s project is the only one in the state to receive funding from Mining Innovations for Negative Emissions Resource Recovery (MINER). The MINER initiative funds technology research that increases mineral yield, while decreasing required energy and subsequent emissions, in order to mine and extract energy-relevant minerals.

Principal project investigator (PI) is Lei Pan, an associate professor in Michigan Tech’s Department of Chemical Engineering. Chemical engineering professors Tim Eisele and David Shonnard are co-PIs on the three-year project, along with researchers from University of Utah and University of Nevada, Reno.

“In this project – states Lei Pan – we target kinetics. Mine tailings contain a substantial amount of carbon-dioxide-reactive minerals such as olivine, which can be used as a carbon sink. It’s been done before, but at a much slower pace. Our method greatly accelerates the kinetics of carbon dioxide sequestration to achieve the result on an industrial scale in just four hours, rather than several years.