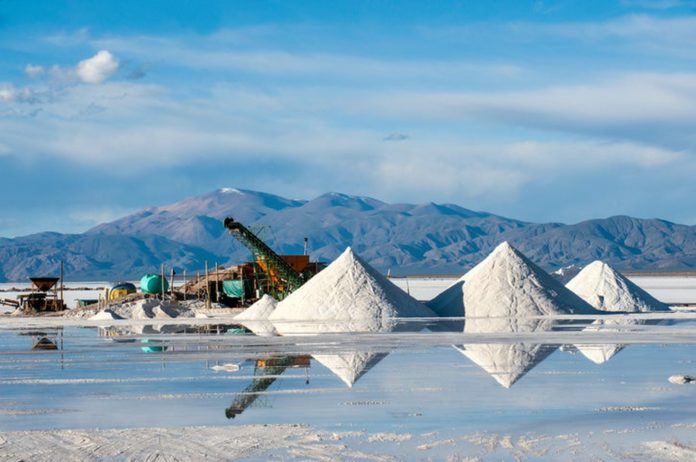 (Original article: The Motley Fool) Albemarle (NYSE:ALB), the world’s largest lithium producer, expects the largest end market for lithium metals to be electric vehicles (EV). And it won’t even be close. In fact, the company projects the EV market alone will see a 599% increase in lithium demand from 2019 to 2025.

Here’s what that means for investors

The end markets for lithium have changed dramatically in a relatively short period of time. According to the U.S. Geological Survey (USGS), nearly 29% of the world’s lithium consumption went to ceramic and glass applications as recently as 2011, compared to 27% for battery applications the same year. The remaining share went to various specialty applications.

Contrast that with 2019, when an estimated 65% of lithium production was consumed by battery applications, compared to only 18% by ceramic and glass products. The discrepancy between end markets will widen further in the 2020s.

Given the new realities facing global citizens and individual investors, it’s fair to wonder how the novel+ coronavirus pandemic and the resulting economic fallout will affect these projections. To be blunt, we’re still in the maelstrom, which makes it impossible to make accurate predictions.

Perhaps these projections are simply stretched out over a longer timeline. Perhaps the projected growth of the EV market vaporizes in the ensuing economic carnage. Perhaps urban citizens come to enjoy the lack of air pollution in cities and run to buy EVs en masse.

Investors should probably expect the projections presented above to be overestimates, but by how much cannot be known. Those with a long-term mindset might still see a great opportunity in lithium stocks, although there are important differences to consider.

There are two main lithium compounds: lithium carbonate and lithium hydroxide. Each is listed as a separate commodity on markets and has its own selling price. While production, demand, and supply contracts are normalized to lithium carbonate — expressed on an LCE basis  — the world is increasingly turning to lithium hydroxide due to its ease-of-processing for battery applications. That creates some considerations for investors.

The mineral brines of South America are better for producing lithium carbonate. Although the material can be converted to lithium hydroxide, brine projects are more difficult to bring into production and have long production profiles once operating (they rely on solar evaporation ponds). Additionally, South America suffers from constrained terrestrial transportation options for moving product from mine to port, and even then the continent’s geographic isolation makes 6,000 mile-plus trips to major consumption markets the short route.

By contrast, the rock deposits of Australia are much better for producing lithium hydroxide. Such projects are also easier to plan and bring into production than the brines of South America, while Australia is a stone’s throw away from the high-volume Asian markets. Therefore, investors interested in the EV angle for lithium stocks might want to pay closer attention to the companies bringing new rock deposits online, especially those with a presence in the land down under.

In the next few years the producer could be spitting out 140,000 metric tons of lithium hydroxide on an LCE basis. That would represent roughly 25% of global production of lithium hydroxide in 2025. Ambitious plans haven’t helped the dividend stock much in recent years, but Wall Street might come around if the business continues delivering on its promises.

Sociedad Quimica y Minera (NYSE:SQM), the world’s second-largest lithium producer, hails from Chile and owns some of the best lithium resources in South America. But it also owns half of a joint venture controlling the Mt. Holland lithium project in Western Australia. Currently expected to come online in 2021, the asset is expected to have a total annual production capacity of 120,000 metric tons of LCE, with plenty more resource for future expansions. The JV will focus on maximizing lithium hydroxide production.

Other companies are ramping up lithium projects in Australia, although most major players are outside of the reach of individual investors for now. There are still a handful of second-tier producers to consider, though. They’re highly dependent on brine projects in South America, which may not have all the benefits of rock deposits of Australia, but meeting the planet’s near-term lithium demand will require all hands on deck. In difficult times, however, they’ll be the first to feel the pinch.

Livent Corporation (NYSE:LTHM) operates exclusively in the lithium brines of Argentina. It produced 20,000 metric tons of LCE in 2019, comprising 17,000 metric tons of lithium carbonate with the balance dedicated to lithium chloride. The company converts the majority of production to lithium hydroxide, which generated 55% of total revenue in 2019. Similar to Albemarle, Livent Corporation’s near-term expansion plans skew heavily toward lithium hydroxide.

Albemarle, SQM, and Livent Corporation have done their parts to delay expansion plans and bring the markets closer to balance, although such stewardship is likely to be overshadowed by the economic consequences of the coronavirus pandemic. While it’s too soon to know what it all means for lithium markets, the long-term potential of EVs and lithium remains bright. Investors with a long-term mindset might want to keep an eye on the industry leaders, especially those with rock deposit assets in Australia, during the current market crash.