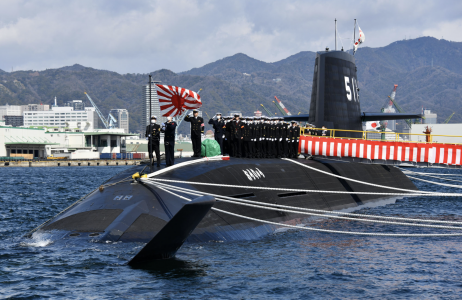 According to THE DIPLOMAT, the Japan Maritime Self-Defense Force (JMSDF) commissioned its first Soryu-class diesel-electric attack submarine equipped with lithium-ion batteries in a ceremony held at the Mitsubishi Heavy Industries facility in Kobe, in Hyogo Prefecture in west-central Japan on March 5.

The Japan Maritime Self-Defense Force press release states that the new SSK JS Oryu submarine was officially inducted into the JMSDF’s Submarine Flotilla 1, based in Kure, Hiroshima prefecture. Oryu is the 11th SSK of the class to deploy with the JMSDF and the sixth to be built by Mitsubishi Heavy Industries.

The Oryu, which was launched in October 2018, is equipped with lithium-ion batteries making the JMSDF the only Navy to have installed this technology aboard a submarine. The new batteries will reportedly enable the Oryu to shut off their diesel-electric propulsion and operate on battery power alone for longer periods under water. Batteries are less noisy than diesel-electric engines and consequently reduce the submarine’s acoustic signature making detection harder.

Source and full article: THE DIPLOMAT