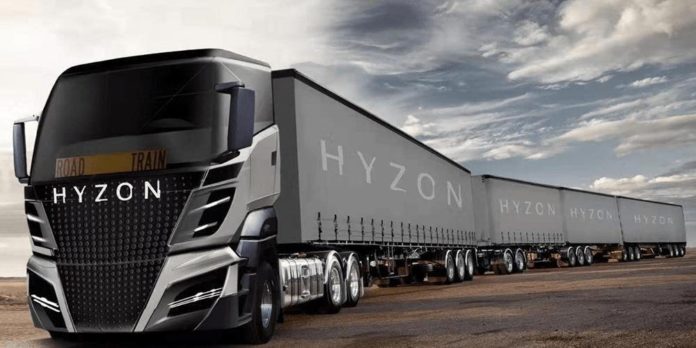 The company has said it will be the first US-based manufacturer of PEM fuel cell modules exceeding 100kW in capacity, specifically designed for commercial vehicles. Hyzon will immediately offer trucks from 15-40 tonnes in gross vehicle weight, powered by Horizon’s high-performance PEM fuel cells along with city and coach buses.

During 2021, the company hopes to market a van platform and light trucks. Zero emission road-trains with a gross weight of up to 140 tonnes will also be commercialized by 2021 in Australia.

“We have seen incredible growth in Asia in recent years at Horizon, and now with the experience gained from hundreds of trucks in commercial service, we aim to bring our technology to the roads of the world,” said George Gu, CEO of Hyzon Motors and Chairman of Horizon Fuel Cell Technologies. Our fuel cell systems have already proven themselves, as we see an opportunity to help the world decarbonise transport much faster than people currently believe is possible.”

Hyzon’s management team is formed of a number of highly experience automotive executives with members of the senior team from Horizon, which holds over 16 years in PEM fuel cell technologies. Headquartered in New York, Hyzon has said that its aggressive commercialization plans will support growing investment in hydrogen infrastructure in the US, Australia, the EU and other areas.

“Having a product which has such great benefits for the environment, we take it as our responsibility to maximize its impact, and the operating experience already gained gives us great confidence in deploying vehicles in many countries, and to support the infrastructure investments in hydrogen availability,” said Brendan Norman, Chief Commercial Officer of Hyzon.

“We need to work hard to deliver meaningful quantities of vehicles right now, to facilitate the inevitable cost-down curve for hydrogen as a fuel in commercial vehicles, and to continue improve the economics around the fuel cell electric vehicle trucks, buses and other high-utilisation vehicles.”