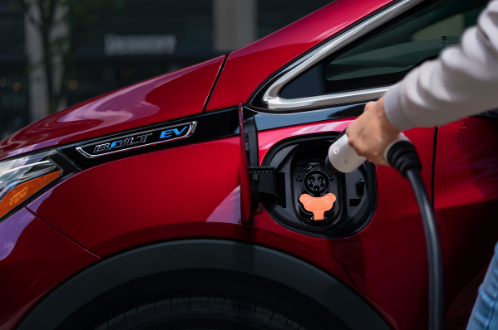 In a major challenge to electric car leader Tesla, General Motors announced it has created a new electric vehicle battery that offers up to 400 miles of range and will be cheaper to produce than today’s batteries.

The new battery cells will hold enough energy to potentially power a car for 400 miles or more on a single charge, the company announced Wednesday. That’s slightly more driving range than any car Tesla offers. Tesla claims a range of 390 miles for the latest version of its Model S Long Range sedan.
GM’s new battery cells will be used in several of its new fully electric models, including a recently unveiled self-driving electric car, the Cruise Origin, and a future Cadillac luxury SUV. GM also hopes to license its battery technology to other companies.
The announcement was part of a broader presentation on the company’s aggressive plans for electric vehicles.
“GM is building toward an all-electric future because we believe climate change is real,” GM CEO Mary Barra said during a presentation for media and investors.
She said the company would be investing more than $3 billion annually in electric vehicle research and development between 2020 and 2025.
“We want to put everyone in an EV, and we have what it takes to do it,” Barra said.

The new battery cells, which GM named Ultium, are soft flat pouches.
The Ultium battery cell uses a minimal amount of cobalt, and that factor, combined with continuing manufacturing improvements, will drive prices down, the company said.
GM promised the new battery cells will quickly come down in price to below $100 per kilowatt hour. Batteries make up a very large part of an electric vehicle’s cost and $100 per kilowatt hour is often cited by industry analysts as the threshold that will enable electric cars to become truly cost competitive with traditional gasoline-powered vehicles.
GM also boasted of its ability to adapt its existing facilities to manufacture electric cars. The company has already said that its Detroit Hamtramck assembly plant, which not long ago produced a variety of gasoline-powered vehicles, will now begin to manufacture only fully electric models.
GM executives believe that the company’s new generation of electric vehicles will be profitable from the outset thanks to these reduced costs. GM admits that today’s Chevrolet Bolt EV — currently the only electric car GM sells in the United States — is not profitable. Battery costs are a major factor in that.
Source: CNN