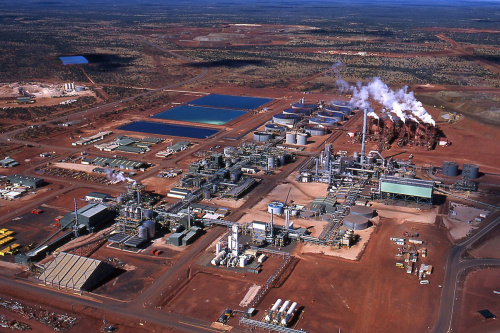 Glencore and General Motors have announced a multi-year sourcing agreement in which Glencore will supply GM with cobalt from its Murrin Murrin operation in Australia. The cobalt processed from Australia will be used in GM’s Ultium battery cathodes, which will power electric vehicles such as the Chevrolet Silverado EV, GMC HUMMER EV and Cadillac LYRIQ.

Murrin Murrin is a remote, fully integrated nickel and cobalt producer located in the north-eastern Goldfields region of Western Australia (in the photo). The company uses conventional open pit mining methods to extract the nickel and cobalt ore, before processing and refining the laterite ore at its hydrometallurgical facility.

Cobalt is a metal that makes up only 0.001% of the earth’s crust. It is known for its heat-resistant properties and is added to lithium-ion battery cathodes to improve energy density and battery longevity.

By the end of 2025, GM plans to have capacity to build 1 million electric vehicles in North America, and has announced a series of actions to create a new and more secure EV supply chain, including projects targeting key EV materials and components: