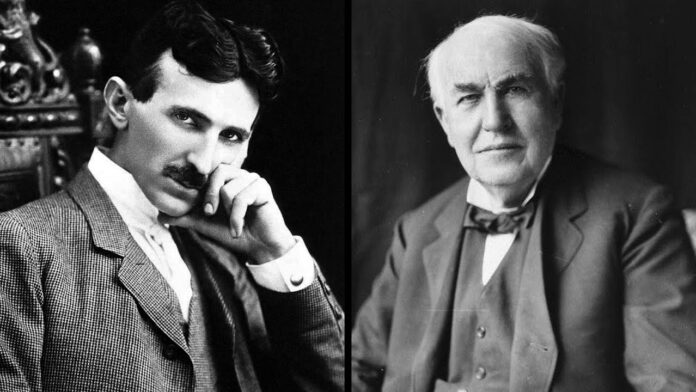 Thomas Edison vs Nikola Tesla. (Original article: Freudenberg Group) The factories of the future could be operated completely with direct current. A major research project coordinated by the Fraunhofer Institute for Manufacturing Engineering and Automation (IPA) in Stuttgart, Germany, is laying the foundation for this.

The lab is not particularly large. But a half­dozen control panels with thick orange cables visible through their glass­enclosed fronts send a message: There are powerful current flows here. But what may seem completely unexciting to a layperson could help to change the direction of electric energy supplies for industry. “For example, we are simulating a welding robot that is operated with direct current,” explained Timm Kuhlmann, who is on the scientific staff of the Fraunhofer Institute for Manufacturing Engineering and Automation (IPA). So far, the energy supply for robots – as is the case for other industrial equipment – has been alternating current.

That has been the standard since Thomas Edison and George Westinghouse fought bitterly over the design of the American electrical grid at the end of the 19th century. [Serbian engineer and physicist Nikola Tesla made dozens of breakthroughs in the production, transmission and application of electric power. He invented the first alternating current (AC) motor and developed AC generation and transmission technology]. Westinghouse, who preferred alternating current, ultimately prevailed over Edison, who advocated direct current. But direct current might be able to establish itself as the better alternative in the future, at least inside today’s factories. Kuhlmann coordinates the “DC­Industry 2” project, which has attracted more than 30 industrial companies and five research institutes as participants. The basic feasibility of using direct current in industry was confirmed in an earlier project. Now the idea is to provide scientific support to companies with the help of plans for a real ­life production hall.

There are good reasons to make the switch to direct current. The first and perhaps most important one involves the conversion of an entire electrical system to climate­ neutral technologies. Unlike conventional power plants, solar and wind energy facilities do not generate electricity continually. If supply and demand are not a 100­percent match, the frequency and thus the voltage of the grid fluctuate – mostly without being noticed but enough that they can impair sensitive production processes. “With a local direct­ current network, a factory can be completely decoupled from these fluctuations – easily and efficiently,” said Alexander Sauer, who has been one of the two directors of Fraunhofer IPA since the start of the year. There is another advantage: More and more companies are covering a portion of their electrical needs on their own, for example, with solar facilities on roofs. However, the semiconductors in solar modules always produce direct current. So far, this electric flow has had to be converted into alternating current using inverters so it can be used in factories. “You can save money by cutting out a lot of inverters,” Sauer explained.

Today’s power electronics have significantly reduced the once relatively high costs of components needed to switch and protect direct current, he said. There will be more opportunities to develop industry ­specific components. So far, scientists are mainly getting by with components from the railway industry. The key component for a factory’s local direct ­current network is the “active front­end” that is used to rectify and transform alternating current at the connection to the grid – for the entire factory or at least one manufacturing hall.

The direct­ current network running in the background operates on around 650 volts. There are still no industrial standards for the new world of electric current, but the foundations worked out in the “DC­Industry 2” project are expected to aid the German Commission for Electrical, Electronic and Information Technologies (DKE), which is responsible for defining them. Greater energy efficiency results from the reduced number of conversions during operation. Today’s inverters operate with very high efficiency, but a few percentage points are still lost when there are multiple back ­and ­forth conversions. The gain in efficiency for a typical industrial robot amounts to about ten percent. The energy needed for braking can be used in adjacent equipment without any losses.

A six percent increase in energy efficiency was shown for a machine tool used for wood processing. If an industrial installation is integrated into a local smart grid, the use of direct current offers another benefit. While alternating current requires additional voltage sensors whose signals are transported within milliseconds over a glass fiber or 5G network, the direct current itself can serve as the control signal for machines. “You cut out both the sensor system as well as the overall realtime communication infrastructure,” Sauer explained.

Built by Thomas Edison in Manhattan in 1882, the world’s first electric grid relied on direct current. The technology might be making a comeback some 150 years later. “Perhaps we will be converting our entire electrical supply system in 20 or 30 years,” Sauer said. “In principle, the advantages that we are showing in factories can be carried over to buildings,” especially since a growing number of end­ devices, ranging from LED lights to laptops, are designed for direct current.