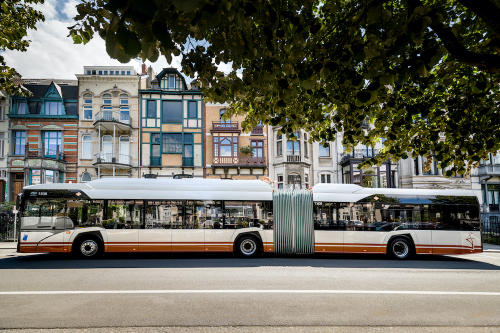 Solaris and the Romanian city of Craiova (Romania’s sixth-largest city) have signed a contract for the delivery of 16 18-meter articulated Urbino 18 electric buses. The articulated vehicles will make it to Craiova in the first half of 2021.

Solaris Bus & Coach S.A., Owińska, Poland, is one of the leading European bus and trolleybus manufacturers. Benefiting from almost 25 years of experience and having manufactured more than 19,000 vehicles, Solaris affects the quality of city transport in hundreds of cities across Europe every day, says the company. The Solaris Urbino 12 electric won the prestigious European “Bus of the Year 2017” competition. In September 2019 Solaris Bus & Coach S.A. joined CAF Group, which acquired 100% of the shares of the company.

The purchase marks the first use of electric buses in the city; therefore under the contract Solaris will also deliver charging devices, both for overnight and fast pantograph charging.

All the electric buses will be delivered in July 2021 at the latest. The contract value amounts to about €12 million. A large part of that money will come from European funds.

The driveline in the articulated electric buses will consist of a 240 kW central motor. Each vehicle will be fitted with Solaris High Energy batteries.

Along with the buses, the city will also welcome 20 charging devices. Throughout the day the Urbino electric buses will recharge their batteries by means of 4 pantograph chargers, whereas at night the recharging will be conducted using sixteen plug connectors.

The air-conditioned Solaris buses will offer WiFi access and a few USB charging ports at which travellers will be able to recharge their mobile phones. The vehicles will also encompass a passenger information system and a monitoring system consisting of seven cameras improving safety and travel comfort. They will also feature passenger counting gates.

Craiova is the second Romanian city after Cluj-Napoca to opt for electric buses made by Solaris. The latter has received from the producer 41 Urbino 12 electric units.