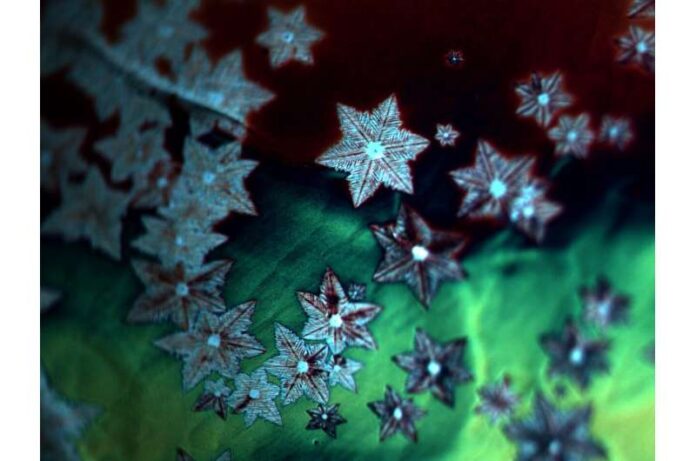 Researchers from Skoltech, MIPT, the RAS Institute of Solid State Physics, Aalto University, and elsewhere have proposed the first graphene synthesis technique that utilizes carbon monoxide as the carbon source. It is a fast and cheap way to produce high-quality graphene with relatively simple equipment for use in electronic circuits, gas sensors, optics, and beyond. The study came out in the journal Advanced Science.

Chemical vapor deposition is the standard technology for synthesizing graphene, the one-atom-thick sheet of carbon atoms in a honeycomb arrangement with unparalleled properties useful for electronics applications and more. CVD usually involves carbon atoms breaking off gas molecules and settling on a substrate as a monolayer in a vacuum chamber. A popular substrate is copper, and the gases used have invariably been hydrocarbons: methane, propane, acetylene, spirits, etc.

“The idea to synthesize graphene from carbon monoxide came a long time ago, since that gas is one of the most convenient carbon sources for the growth of single-walled carbon nanotubes. We have had working experience with carbon monoxide for almost 20 years. However, our first experiments with graphene were unsuccessful, and it took us a long time to understand how to control the nucleation and growth of graphene. The beauty of carbon monoxide is in its exclusively catalytic decomposition, which allowed us to implement self-limiting synthesis of large crystals of single-layer graphene even at ambient pressure,” the study’s principal investigator, Skoltech Professor Albert Nasibulin says.

“This project is one of the brilliant examples of how fundamental studies benefit applied technologies. The optimized conditions leading to the formation of large graphene crystals became feasible owing to an understanding of the deep kinetic mechanism for graphene formation and growth verified by both theory and experiment,” a co-author of the paper, Senior Research Scientist Dmitry Krasnikov of Skoltech stresses.

The new method benefits from the principle of so-called self-limiting. At high temperatures, carbon monoxide molecules tend to break up into carbon and oxygen atoms when they come in close proximity to the copper substrate. Yet once the first layer of crystalline carbon is deposited and separates the gas from the substrate, this tendency subsides, so the process naturally favors the formation of a monolayer. Methane-based CVD can also operate in a self-limiting manner, but to a lesser extent.

“The system we used has a number of advantages: The resulting graphene is purer, grows faster, and forms better crystals. Moreover, this tweak prevents accidents with hydrogen and other explosive gases by eliminating them from the process altogether,” says the study’s first author, Skoltech intern Artem Grebenko.

The fact that the method rules out combustion risks means that no vacuum is required. The apparatus works at standard pressure, making it much simpler than conventional CVD equipment. The simplified design, in turn, leads to faster synthesis. “It only takes 30 minutes from taking a bare piece of copper to pulling out the graphene,” Grebenko says.

Since vacuum is no longer needed, the equipment not just works faster but also becomes cheaper. “Once you drop the high-end hardware for generating ultrahigh vacuum, you can actually assemble our ‘garage solution’ for no more than $1,000,” the researcher stresses.

Study co-author Boris Gorshunov, a professor at MIPT, emphasizes the high quality of the resulting material: “Whenever a new graphene synthesis technique is presented, it is imperative that the researchers prove that it produces what they claim it does. After rigorous testing, we can say with confidence that ours is indeed high-grade graphene that can compete with the material produced via CVD from other gases. The resulting material is crystalline, pure, and comes in pieces large enough to be used in electronics.”

Besides the standard applications of graphene as such, there are intriguing possibilities for using graphene bound to the copper substrate—without clearing away the metal. Compared with methane, carbon monoxide has a very high energy of adhesion to metal. This means that, as deposition occurs, graphene both protects the copper layer from chemical reactions and endows it with structure, creating a highly developed metal surface that has great catalytic properties. Some other metals, such as ruthenium and palladium, would also work in this context to open an avenue for novel materials with unusual surfaces.