BYD, a global leader in zero-emission vehicles, is celebrating its 10th anniversary as a producer of Lithium Iron-Phosphate battery-powered forklifts by launching to the market its BYD dual-charging system, promising its customers industry-leading recharge speeds. It is also bringing to the market the latest generation of the BYD PTP20P Stand-On Pallet Truck.

Already renowned for the ability to be charged significantly faster than comparable lithium-ion battery systems, the unique BYD Iron-Phosphate battery technology becomes an even more compelling proposition when paired with the new BYD dual-charging system, ensuring the manufacturer remains a step ahead of its rivals.

The BYD dual-charging system – available initially for the IFOY Award-nominated ECB50 counterbalance forklift – offers two charging ports to the material handling equipment, effectively doubling the charging speed when connected to a pair of charger guns each offering 200A when plugged into a single compact, intelligent BYD charger. In environments where high productivity relies on maximum availability of the material handling fleet, such as high-throughput warehouses and cross-docking facilities, the BYD dual-charging system will ensure industry-leading levels of uptime.

In 2020, BYD celebrates its 10th year as a manufacturer of Lithium Iron-Phosphate battery-powered forklifts, longer than any of its competitors in the forklift market. It is a global market leader in renewable energy solutions, and is the only forklift maker that designs, manufactures and develops its own batteries, thus ensuring it can bring benefits from technological advancements directly and rapidly to market.

“We are excited to announce the BYD dual-charging system as we celebrate our 10th anniversary as a forklift manufacturer,” says Blade Feng, Forklift Business Unit Director at BYD Europe. “As a pioneer in the rapidly developing Iron-Phosphate powered forklift sector, we are continually innovating to ensure our customers are provided with the means to operate at maximum efficiency with the smallest-possible impact on the environment. Our dual-charging system not only provides rapid charging, but also does so in a safe and sustainable manner.

BYD is also launching to the market its second-generation BYD PTP20P Stand-On Pallet Truck. Initially scheduled for its world premiere at the cancelled LogiMAT 2020 trade fair, this completely re-engineered high-speed truck, with a driving speed up to 12 km/h, features superior stability, flexibility, and a floating driving system for optimal traction, a 2000kg load capacity, and has a fixed platform and side panel.

Like all BYD material handling equipment, the new BYD PTP20P is powered by BYD Iron-Phosphate battery technology, ensuring high levels of reliability and uptime, and a highly competitive Total Cost of Ownership (TCO). 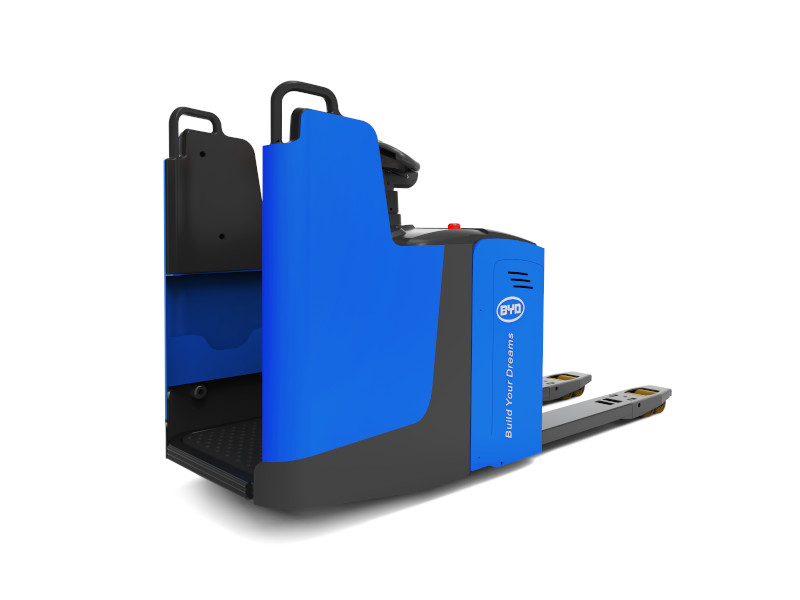 When compared to equivalent equipment powered by traditional lead acid batteries, BYD batteries require no maintenance, have a shorter charge time, a longer working life, and use considerably less energy. BYD fast-charging technology allows the charging time to be reduced to just one hour. Furthermore, BYD batteries can be topped-up during short breaks in operations with no detrimental effect to the integrity of the battery, thus guaranteeing maximum uptime at the lowest-possible cost.

“As a leading manufacturer of new energy vehicles and a global leader in the manufacturer of electric buses, our tried-and-tested Lithium Iron-Phosphate battery technology is at the heart of all of our material handling equipment,” says Blade Feng. “With maintenance-free operation and an up-to-40% reduction in energy use compared to equivalent capacity lead acid battery-powered equipment, BYD trucks are particularly well-suited for multi-shift applications and enable both distribution partners and operators to make an easy investment decision.”