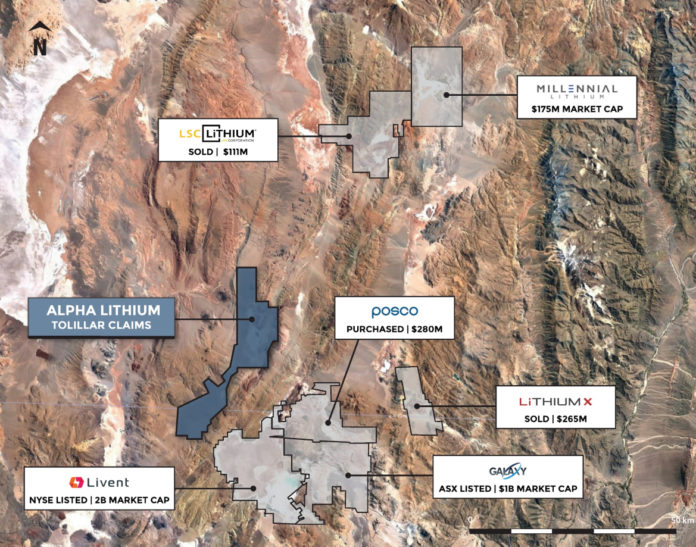 Alpha Lithium Corporation (TSX.V: ALLI) (OTC: ALLIF) has announced it has commenced assessing all available historic data regarding its recently acquired Salar de Tolillar Project located within the Salta provincial boundaries of the Puna region of the northwestern part of Argentina.

Brad Nichol, Company CEO notes, “Today’s announcement highlights the combined efforts between our growing team in Argentina under David Guerrero, our newly appointed Country Manager, who has engaged trusted, local hydrogeological experts with vast Argentine lithium exploration experience, including at the Hombre Muerto, Cauchari and Olaroz salars, amongst others. The team has sourced, referenced and is reviewing all available regional and localized geophysical data. It has already been determined that the historic data was previously shot on a very small area of Tolillar Salar with underpowered equipment, thereby limiting depth penetration. The data reviewed to-date, when interpreted in conjunction with numerous regional factors that have only become evident in recent years, is believed by Company experts as offering a general geological hypothesis for favourable hydrology with potential for depth and extent of lithium mineralisation within the basin.”

Alpha reports all permits are in-place to proceed with an advanced seismic survey, which it plans to conduct upon conclusion of the historical data analysis and generation of primary study locations. The Company intends to improve upon the existing geological model using higher-powered equipment resulting in deeper penetration combined with a highly detailed area-wide program to include much larger, previously unexplored sections of the massive salar. The program is designed to indicate specific locations for the planning of future drill locations and concurrent roads, base camp, storage depot and related infrastructure requirements as part of the operational strategy to determine the nature, extent and valuation of the Tolillar asset.

As noted previously, the Argentinian government supports ongoing mining activities in Salta province as an “essential activity” during the current COVID-19 pandemic. The company continues to actively monitor the situation and is working closely with its in-country team to implement preventative measures to safeguard the health of its employees and contractors.