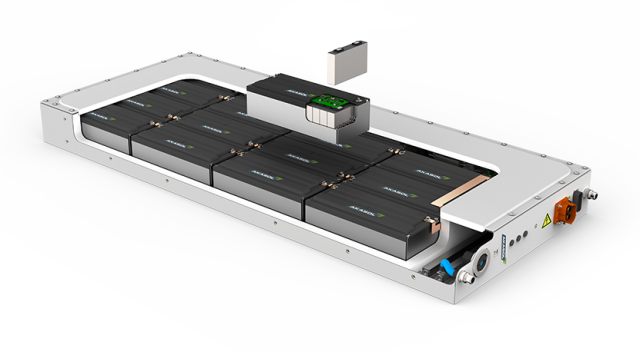 With the implementation of the second series production line, the company says it has more than doubled its annual maximum production capacity in Langen to up to 800 MWh compared to 2019. The first production line, which Akasol commissioned in 2017, has so far been used to manufacture the first generation of battery systems. In earlier reports, a capacity of 300 MWh was mentioned there. The new assembly line, simply called “Langen II”, will now be used to produce the second-generation systems.

With this further development, Akasol is also reacting to the increasing range requirements for the electrification of commercial vehicles. With the second generation of battery systems, the company will be able to supply its series customers with battery systems with more than 30 percent additional energy from mid-2020, while maintaining the same weight and installation space in series production.

“In view of the dynamic market development and the associated expansion of our framework contracts with existing serial customers – as well as promising discussions with potential new customers – it is all the more gratifying that we managed to expand our production capacities with a second and at the same time improved serial production line at the Langen site, six months earlier than announced at the IPO,” says Sven Schulz, CEO of Akasol AG. In addition, a change from the current two-shift to three-shift operation is possible.

However, the company intends to wait and see the current effects of the coronavirus pandemic. “Of course, we expect a short-term decline in demand as a result of the steps taken to contain and slow down the spread of the coronavirus,” says CFO Carten Bovenschen. Nevertheless, we expect a strong second half of 2020,” says CFO Carten Bovenschen. In addition to Langen II, the establishment of US production in Hazel Park would also provide the basis for sustainable growth. CEO Schulz adds that “Based on the current state of affairs and a continuous review of our supply chains” he believes that material availability is assured for the coming months.

In addition to Langen and Hazel Park, Akasol also plans to build a new production facility at its headquarters in Darmstadt – with a total capacity of 5 GWh, Darmstadt will then significantly exceed the Langen site.