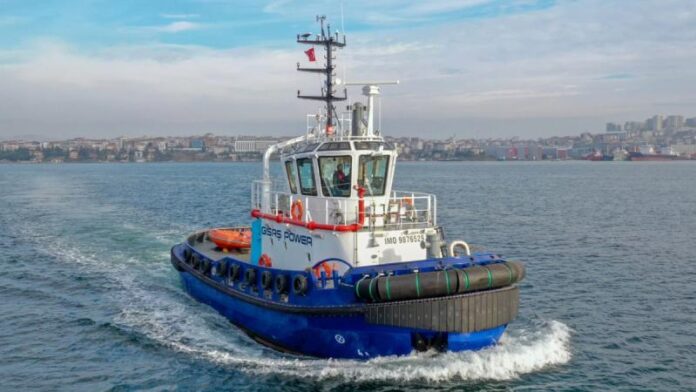 Just a few years ago, building a tug without a diesel engine would have seemed implausible, if nearly impossible. “This is a new era for the shipping business,” said Navtek Naval Technologies Inc. general manager Ferhat Acuner.

Built at TK Tuzla Shipyard for Turkish owner GİSAŞ Gemi İnşa Sanayi A.Ş.shipbuilding industry, the first Zeetug, Gisas Power, went into service this year, operating in the shipyard zone in the Port of Istanbul. Designated a Zeetug30 design for its 32 tonnes of bollard pull, Gisas Power has an overall length of 18.7 m, beam of 6.7 m, depth of 4.7 m and design draught of 3.5 m, with a service speed of 10 knots.

Gisas Power draws all its power from two 1,450-kW lithium-ion battery packs supplied by Corvus Energy. For safety, the tug has two redundant battery rooms, one fore and one aft, that are maintained at a constant temperature by a cooling system.

Responsive and manoeuvrable
When compared to a diesel-mechanical tug, an all-electric tug offers the captain and crew better response and manoeuvrability. “Full power is right under your hand,” said Mr Acuner. “It is limited only by your mechanical systems.” Added benefits for the crew are that an all-electric tug is quiet, with minimal or no vibration. A full charge for the tug can be accomplished in one hour by a quick-charging station specially designed by Navtek.

As compared with similar-sized, diesel-mechanical tugs, Mr Acuner said the all-electric Zeetug30 is expected to save 210 tonnes in CO2 emissions and 9 tonnes of NOx emissions in a year.

Just as impressive as the tug’s environmental credentials are its operational expenses. Navtek estimates the operational expenses for the Zeetug will be 15% of that of a similar-sized diesel tug. Mr Acuner said Navtek based its calculations on the studies of five similar-sized diesel-drive tugboats. Calling the Zeetug’s projected opex “amazing,” Mr Acuner said his team was in the process of verifying the figures based on Gisas Power’s first month of actual operations.

Remote monitoring and diagnostics allow technicians and engineers to resolve any issues in real-time. Additionally, any software system updates can be performed remotely.

Inevitably, when discussing all-electric vessels, questions about battery life are raised. Mr Acuner said the expectations are that the vessel’s batteries will have a life of 10 years. “By the 10th year we expect 87% capacity,” he said. “You can switch out for newer technology.” While a lithium-Ion battery might no longer be suitable for use on the vessel, the remaining capacity – 60 to 70% – can still find a ‘second life’ for other uses before it is recycled.