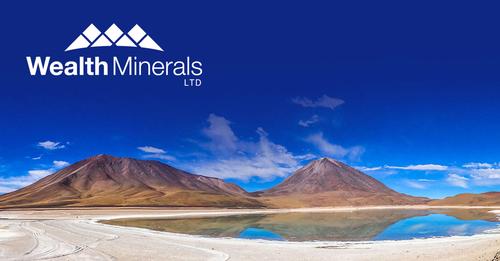 Wealth Minerals Ltd. reports it has begun drilling on the Ollagüe Salar (the “Project”) in northern Chile. Wealth’s drill program comprises approximately five holes for a total of 1,500m of diamond drilling. This drill campaign will test brine anomalies as interpreted by prior geophysical studies. The campaign’s results will be augmented by exciting earlier third party drill information Wealth identified on the Project via its recent acquisition of 1,600 ha in the same Ollagüe Salar (see press release dated May 3, 2022).

The Company anticipates publishing a maiden NI 43-101 compliant resource on the Project following the completion of drilling, laboratory work and analyses.

Wealth’s CEO Hendrik van Alphen commented: “The team at Wealth is advancing our projects and doing so in a responsible way that includes the input of all stakeholders. Our goal in the short to medium term is to provide metrics for the Project that will allow the capital markets to benchmark Wealth to other peer companies and guide our efforts for future Project development.”

The Ollagüe Project consists of 8,000 hectares located in northern Chile, Region II, near the Bolivian border and approximately 200km due north of the Atacama Salar. Lithium Chile Inc. conducted a drilling campaign at Ollagüe in 2018, which returned lithium grades up to 480 Li mg/l while earlier surface sampling returned lithium grades as high as 1,140 Li mg/l. Readers are cautioned these results are not in any way indicative of mineral deposits on Wealth’s mineral properties or position in the Ollagüe basin. Wealth previously conducted a coincident loop Transient Electromagnetic survey on the Ollagüe Project, which identified very highly conductive zones interpreted to represent porous media with high-salinity fluids (potentially lithium-bearing brines) at depth.