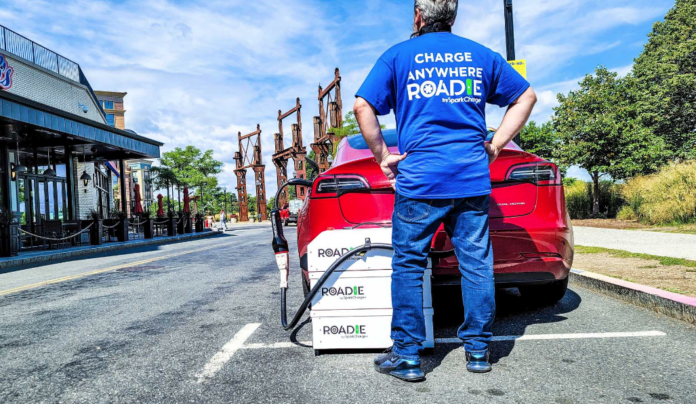 SparkCharge, Inc., the Massachusetts-based startup has introduced the latest version of its portable electric vehicle DC fast charger, called the Roadie. The new product was announced last week in what the company called its first annual “SparkDay” event, Insideevs.com reports.

A lot has changed since we first covered SparkeCharge back in April. At the time, they had recently raised $3.3 million in seed round financing and were planning on scaling up manufacturing of the 20 kW portable DC fast-charge system that’s primarily designed for roadside assistance service. That’s powerful enough to deliver about 1 mile of driving range for every minute of charging.

Typically, when an EV does run out of power, the driver isn’t very far from their destination. For one reason or another, they just didn’t make it to the charging station along the route or to their final destination. A 15-minute charge will deliver roughly 15 miles of driving range which should, in most cases, get them to their destination.

Sparkcharge is currently available with a CHAdeMO connector, but a CCS option will be available soon. It certainly makes sense to offer the CHAdeMO option first here in the US, because Tesla vehicle can charge on CHAdeMO with an adapter, while they cannot charge on the more dominant DC fast charge standard here, CCS. Since the vast majority of EVs in the US are Tesla vehicles, we believe SparkCharge made the right call in developing the CHAdeMO version first.

BoostEV connects EV drivers with SparkCharge Service providers. Instead of calling a tow truck or AAA, an EV owner that’s run out of juice can call for a 20 kW boost from the BoostEV mobile app, and the service provider will respond to the scene.

BoostEV service is currently available in Richmond, VA, Chicago, IL, Boston, MA, Dallas, Houston and San Antonio, TX, Washington, DC, San Francisco, Los Angelos and San Diego, CA as well as in Manchester, UK, with more markets coming soon. The BoostEV app is still in the final testing phase and will be available for public download in about a month.