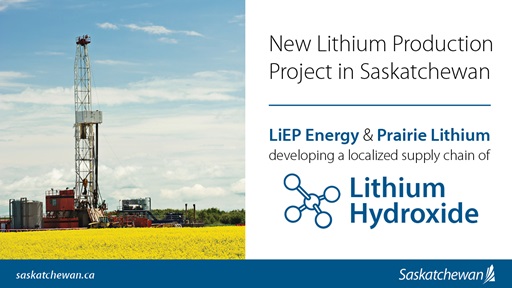 Saskatchewan – a Canadian province that borders the United States to the south – will soon be home to a new lithium production project. The Prairie-LiEP Critical Mineral (PLCM) joint venture is being undertaken by Prairie Lithium Corp. (Emerald Park, Saskatchewan) and Calgary-based lithium refining company LiEP Energy Ltd. Their two-stage pilot project will produce lithium hydroxide from some of the province’s oilfield brines, GlobalNews reports.

“This is another exciting development that promotes economic diversification in Saskatchewan,” Canadian Energy and Resources Minister Bronwyn Eyre said. “Lithium has great potential, due to increasing worldwide demand, which is why supporting extraction technologies and a viable lithium sector are included in Saskatchewan’s growth plan.”

The first stage of the project is based in Regina and is set to being in July. The second stage is set for the second half of 2021, with field operations in southern parts of the province.

“The lithium industry has the potential to be another significant economic driver and help our province through economic recovery,” Trade and Export Development Minister Jeremy Harrison said. We are pleased to welcome this new project to our province and look forward to the future opportunities it will bring for our residents.”

The project has been conditionally approved by the Ministry of Energy and Resources under the Saskatchewan Petroleum Innovation Incentive (SPII) program. SPII targets a broad range of innovations deployed across the province’s oil and gas industry, which includes lithium.

“The province has been great to work with and is committed to diversifying the economy through innovation. We believe that Saskatchewan has the potential to be a global player in the production and chemical processing of lithium, and both companies are thrilled to be working toward proving that potential.”

The province said global demand for lithium is expected to increase by 10 per cent every year between 2019 and 2024.