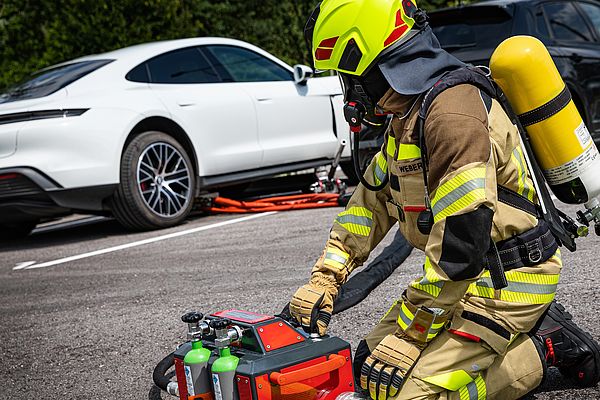 With the increase in battery-powered electric vehicles (BEVs, HEVs and PHEVs) on the road, statistically the risk potential for an accident or technical defect of the inherently safe battery systems also increases. However, for the most part, emergency crews do not have appropriate equipment and/or techniques to counter these fires, the response to which entails many unknown factors. For this reason, Rosenbauer, a leading global manufacturer of systems for firefighting and disaster protection, set itself the goal of better understanding the issue and researching practical new approaches to fire de-escalation, thus providing safe rescue modules for emergency crews.

The Achilles’ heel of a battery is the separator, Rosenbauer notes; the separator has only limited temperature resistance. If the cell is damaged (mechanically, overcharging, external heat), the separator breaks and a short circuit occurs, releasing all the stored energy (electrical as well as chemical) in the form of an enormous heat build-up, the so-called thermal runaway, followed by a fire. This heat damages the neighboring cells and a chain reaction occurs. In this state, extinguishing from the outside is not possible. The spread of the chain reaction can only be slowed down or stopped.

Since the current systems and measures on the market did not seem practical, neither in terms of the water resources used nor the glaringly higher deployment times and, in some cases, costs, the Rosenbauer team, after extensive battery escalation analysis, developed an extinguishing system that can slow down and stop the chain reaction in the shortest possible time.

The system pierces the housing, applying the water exactly where it is needed: to cool the cells and modules in the battery housing. Extinguishing thus takes place in a very resource-efficient way and reduces the spread of flue gases to a minimum.

The system consists of two main components, an extinguishing unit and a control unit, connected to each other with hoses. The extinguishing unit is positioned on the battery and, if necessary, supported on the car body or other points. The preferred position is between the road and the vehicle when the vehicle is on all four wheels. It is also possible to use the system via the interior and luggage compartment, or from the top in the case of vehicles lying on their sides or on the roof.

The system is activated via the control unit at a sufficient distance from the vehicle (approx. 8 meters). The piercing nozzle is driven into the battery with a force of several tons and the water is discharged directly into the battery through the perforated nozzle. The water fills the battery housing completely and thus ensures efficient cooling.

After the battery has been cooled to the point where the cell temperature is in a safe range, the vehicle is ready for transport. The extinguishing unit can remain in the battery during transport (and at the quarantine site). This allows water to be quickly pumped into the battery housing at any time, regardless of whether the vehicle is being transported with a roll-off container dumper or on a tow truck with a fire blanket.

The system has been tested in numerous fire tests by Rosenbauer with a wide variety of battery designs (pouch, prismatic and round cells) in different vehicle platforms. In addition, industrial, professional, and volunteer fire departments across Europe have been testing the system for months with their operational tactics, operational technology and crews, demonstrating that it is compatible with existing resources and tactics.

The new Rosenbauer battery extinguishing system can be ordered now and will be delivered at the beginning of next year.