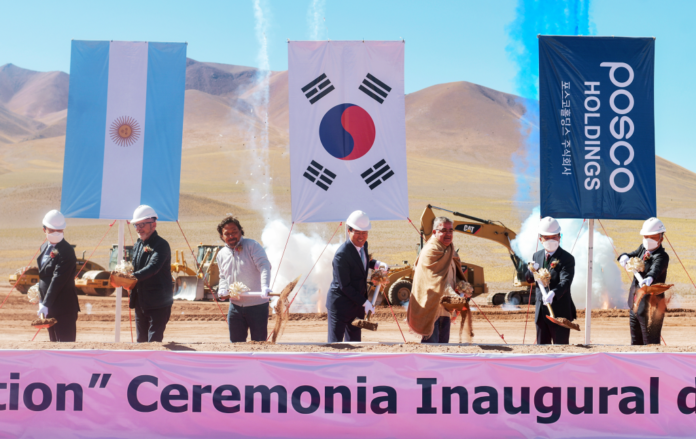 POSCO Holdings has started construction of a lithium commercialization plant in Argentina. It is the first group to produce lithium hydroxide for batteries in Argentina throughout the entire process from the acquisition of mining rights to exploration, construction and operation of a production plant.

POSCO Group CEO Jeong-woo Choi attended the groundbreaking ceremony for the brine lithium plant based on the Hombre Muerto Salt Lake, located in the 4,000-meter-high Salta Province in Argentina, which was held on March 23, along with Byeong-og Yoo, Head of the Green Materials & Energy Business Team of POSCO Holdings, Kwang-bok Kim, President of POSCO Argentina, Gustavo Saenz, governor of Salta, Raul Jalil, governor of Catamarca, and Myung-soo Jang, South Korean ambassador to Argentina.

CEO Choi’s participation in the groundbreaking ceremony is his first global move since the launch of the holding company of POSCO Group on March 2 and the first on-site visit for the lithium business, one of POSCO Group’s seven major core businesses.

Construction of the brine lithium plant, which began on the same day, is to be completed in the first half of 2024, with annual production of 25,000 tons of lithium hydroxide. The total investment cost is about 830 million dollars (about KRW 0.95 trillion) including infrastructure investment and operating funds.

Operation of the lithium plant and financing will be 100% carried out by POSCO Argentina, a subsidiary of POSCO Holdings.

POSCO Group plans to increase mass production to 50,000 tons from the end of 2024 with an additional investment in annual production of 25,000 tons in the second phase of the lithium project, which will begin construction on the same day.