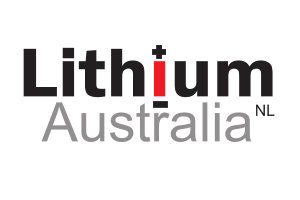 VSPC Ltd – Very Small Particle Co. Ltd., Brisbane, Australia, is a 100% owned subsidiary of Lithium Australia NL, West Perth, Australia, (‘the Company’). In October 2019, at its Brisbane research and development facility, VSPC initiated a project to develop low-cost raw material options for its proprietary process for cathode material synthesis. The project is being co-funded by the Australian Manufacturing Growth Centre (‘AMGC’), a not-for profit organization established by the Australian federal government to support the development of world-leading advanced manufacturing in Australia.

Project objectives include the following.

 Demonstrate the technical feasibility of producing advanced LFP cathode material via an optimised process that, significantly, requires less chemical reagents (the process has been dubbed ‘VSPC-RC’, where ‘RC’ is an acronym for ‘reduced cost’).

 Evaluate the techno-economic feasibility of LFP synthesis using lower-cost raw materials such as iron sulphate, iron oxides and LP from several sources, among them:

 the Company’s LieNA® process (which targets fine and/or low-grade spodumene), and

With stage 2 of the project now complete, VSPC is pleased to report the following.

 The VSPC-RC process was operated at laboratory and pilot scale to produce advanced LFP cathode material via a simplified process operation and with consumption of chemical reagents significantly reduced.

 Such process refinements could reduce reagent costs by 15-20%, depending on project location, which is significant given that prices for chemical reagents account for more than half the total costs of manufacturing LFP cathode material.

 A further 5-10% reduction in chemical costs was achieved by manufacturing iron oxalate (normally a major reagent cost) from base chemical reagents that included iron sulphate and iron oxide materials. 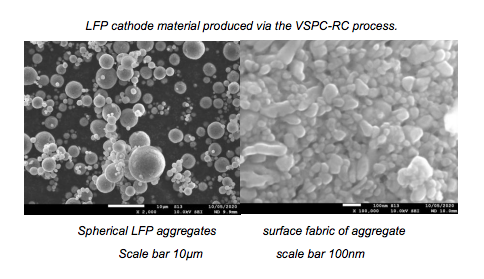  Importantly, the advanced LFP cathode material VSPC produced demonstrated excellent electrochemical performance (equivalent to or exceeding that of VSPC’s standard LFP material); viz:
– specific capacity = 158 milliampere hours per gram (‘mAh/g’) at a 0.1C discharge rate in coin cells (a 0.1C discharge rate means that the discharge current will discharge the entire battery in ten hours), and
– the physical properties for electrode coating were excellent. Electrochemical discharge curves for the advanced LFP cathode material produced via the VSPC-RC process from SiLeach® -generated LP are shown in the graph below (160 mAhg -1 at 0.1C discharge rate). 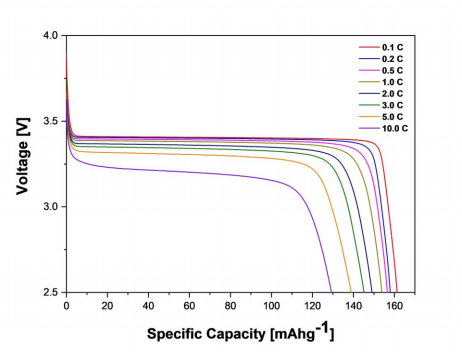 These results further support the cost-competitiveness of the VSPC-RC process, as well as its flexibility in terms of application to several lithium raw materials, including lithium carbonate, lithium hydroxide and LP.

Indeed, LP offers a direct, efficient route from both mineral and recycled sources to the production of LFP cathode material for the fastest growing sector of the LIB market.

Stage 3 of the VSPC project, which has now commenced, encompasses:

Comment from Lithium Australia MD Adrian Griffin
“Using easily available and lower-cost base reagents in the manufacture of LFP can have a profound impact on the price of production. It is imperative that VSPC maximises its competitive advantages in terms of both reagent inputs and physical manufacturing costs. The AMGC grant has been the catalyst in evaluating lower-cost options that may not otherwise have been considered. In many cases, such options are location-specific, so the results of this study may well lead to Australia being seen as a more competitive place for the production of LFP batteries.”

About Lithium Australia
NL Lithium Australia aims to ensure an ethical and sustainable supply of energy metals to the battery industry (enhancing energy security in the process) by creating a circular battery economy. The recycling of old lithium-ion batteries to new is intrinsic to this plan. While rationalising its portfolio of lithium projects/alliances, the Company continues with R&D on its proprietary extraction processes for the conversion of all lithium silicates (including mine waste), and of unused fines from spodumene processing, to lithium chemicals. From those chemicals, Lithium Australia plans to produce advanced components for the battery industry globally, and for stationary energy storage systems within Australia. By uniting resources and innovation, the Company seeks to vertically integrate lithium extraction, processing and recycling.