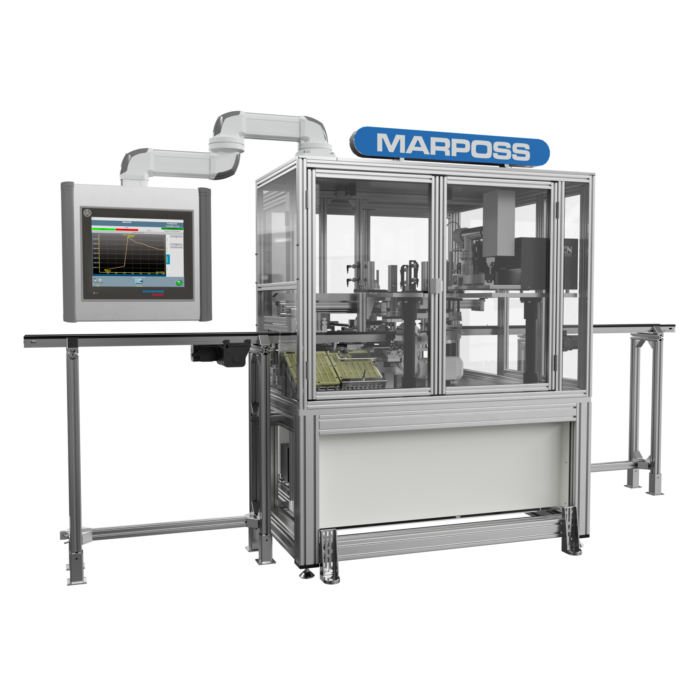 Marposs – a leader in measurement, inspection and test technologies – has announced its new automatic machine for leak testing of sealed batteries in high production environments. This patent pending system is based on electrolyte tracing, which makes it possible to perform the leak test after it has been filled with the electrolytes and completely sealed.

Perfect sealing is necessary to prevent the loss of electrolytes, often composed of flammable solvents which can produce toxic substances if they come in contact with humidity in the air. Additionally, it is equally important to prevent moisture and other sources of external contamination from entering the cell, which can compromise functionality.

Current state-of-the-art leak testing systems for battery cells use helium as a tracer gas in the vacuum chamber, which requires testing prior to filling with the electrolyte and sealing of the cell.

Therefore, the tightness of the final seal cannot be totally verified. The ability of the Marposs system to test after filling and sealing provides higher quality verification of batteries being used in electric vehicle (EV) production.

During operation, the cells are placed in the vacuum chamber during the test. In the presence of a housing leak, partial vaporization of the electrolyte solvent occurs, and it exits from the cell towards the vacuum chamber. The test principle is based on the possibility of measuring the extent of the leak by tracing these electrolyte vapors
with a quadrupole mass spectrometer.

Cells can be tested in different stages of the production process: immediately after electrolyte filling and sealing, after formation, or after degassing and subsequent final sealing, and up to the check during the end-of-line testing.

The Marposs automatic leak test system is available in three versions: cylindrical and button cells, prismatic cells and pouch cells. The pouch cell version requires tooling to constrain the surface of the cell to avoid swelling when the vacuum is performed. The systems can trace different types of solvents typically used in the production of lithium-ion cells, such as DMC, DEC, EMC, PP, etc.