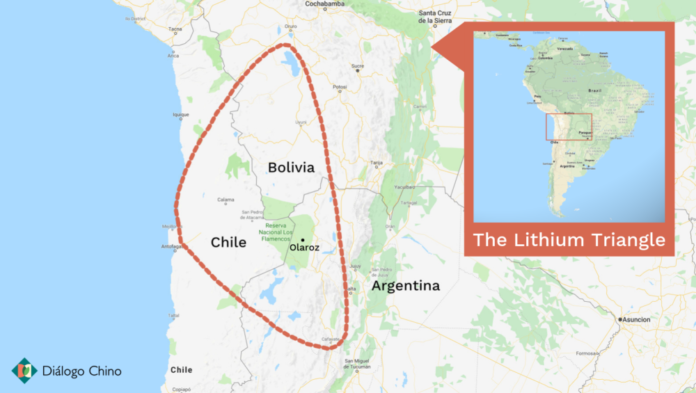 The insatiable demand for the latest smartphone, along with a need to transition to clean energy, keeps driving demand for the lightest of metals. Lithium, with its high electrical conductivity, is key to many rechargeable devices, such as cellphones, laptops, and energy storage systems, not to mention electric vehicles, for which global sales are expected to rise 70 percent in 2021. All in all, the global lithium market is projected to quintuple over the next 35 years, Americas Society / Council of the Americas reports.

That bodes well for the countries of the Lithium Triangle—Argentina, Bolivia, and Chile—where 58 percent of the world’s identified lithium resources lies, per January 2021 data from the U.S. Geological Survey. The South American region’s abundance is partly due to the vast salt flats, or salares, where the metal is extracted from brine pools through an evaporation process facilitated by the arid, sunny climate.

Resources, however, do not necessarily translate to accessible reserves or production capacity, which require technology, investment, and a favorable regulatory framework to harness the power and potential of this so-called “white gold.” 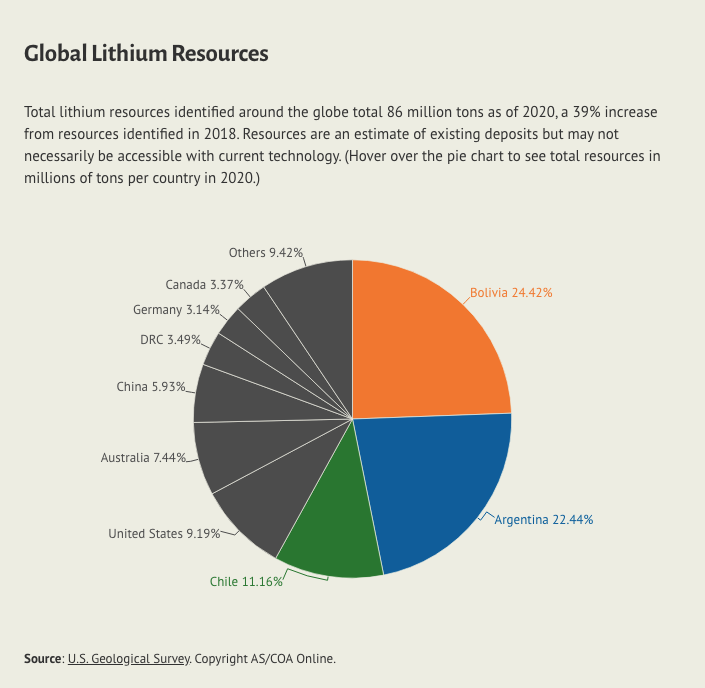 An over-supply of lithium, coupled with falling prices in recent years, led mining companies to scale back operations. Yet, lithium consumption, 70 percent of which goes toward batteries, continues to rise. Add to that pandemic-fueled logistical hurdles stalling projects and the seven- to 10-year cycles needed to launch production, and securing the metal’s supply has become a strategic concern for technology manufacturing hubs. Such is the case for China, the EU, Japan, South Korea, and the United States, which together import 78 percent of the world’s total dollar value of lithium carbonate, the metal’s most commercial compound.

Here we identify the state of lithium development in the three Lithium Triangle countries, as well as the lesser-known players in the field.

Globally, Argentina ranks third in terms of largest proven reserves, fourth in lithium production, and first among U.S. sources of lithium imports. Most of the mineral deposits are found in the salares of the northwestern provinces of Catamarca, Jujuy, and Salta. The Hombre Muerto salt flat in Catamarca is home to the country’s inaugural Fénix project, which started producing lithium in 1997. The country’s second project, Olaroz in Jujuy, didn’t come online until 2015.

While these are the only salares in operation, the country had nearly 40 more projects in the works as of June 2019, from the expansions of the existing two mines, to another two under construction, and many more in both early and advanced exploration phases. The pandemic slowed various projects that were set to double the country’s installed capacity in 2021. Now the two mines under construction—Caucharí-Olaroz and Salar de Centenario Ratones—postponed production plans until 2022 in the case of the former and indefinitely for the latter.

Nonetheless, Argentine President Alberto Fernández intends to increase production almost sixfold from 40,000 metric tons of lithium carbonate equivalent (LCE) to 230,000 metric tons by the end of 2022, which could boost exports from $190 million to $1 billion, according to Mining Minister Alberto Hensel. With an eye toward renewing the country’s transportation system, Planning Minister Matías Kulfas is set to introduce a bill to Congress in March that would redefine the industrialization of lithium to incorporate small- and medium-sized business into the domestic value chain in battery and automotive manufacturing, as well as generate domestic employment and include communities in development plans. The governors of the “Norte Grande” (Big North), where the salares are concentrated, are likely to support such a model, according to Catamarca’s Raúl Jalil.

The regional governments’ backing is key, given that Argentina’s federalist system gives provinces mineral rights, which they can explore and exploit according to their own constitutions. The national Constitution provides guidelines regarding the environment and a free, prior, and informed consultation process with local indigenous communities.

The investment climate is complicated by Argentina’s economic instability and devaluating peso. In October 2020, the Fernández government reduced the tax on mineral exports from 12 percent to 8 percent and, to further attract investment, the government has hinted at potentially implementing a progressive tax that could begin at a lower rate for new projects. According to a 2019 report by the Inter-American Development Bank, Argentina has the greatest potential of the Lithium Triangle countries for exploration and exploitation, thanks to a regulatory framework more open to investment

Bolivia’s Salar de Uyuni holds the single largest deposit of identified lithium resources in the world. But restrictions and delays in exploiting the metal mean little is known about the potential for its economic viability, hence the lack of data on proven reserves. The salt flat’s December through March rainy season complicates the technical feasibility of extraction, potentially extending the evaporation process.

Though former President Evo Morales promised to make Bolivia the world’s lithium capital, attempts to nationalize the element—as Morales did with the oil and gas sector in 2006—have deterred investment. As part of a national strategy, Morales created the state company Yacimientos de Litio Boliviano (YLB) to oversee the development of a domestic lithium battery supply chain.

The state initiated the Llipi pilot project in 2009, which produced and sold its first batch of battery-grade lithium carbonate to China in 2015. The second phase would lead to the construction of a commercial lithium plant as part of a joint venture between YLB and a German firm, with the capacity to produce 40,000 tons of LCE a month. The deal promised to be a turning point as construction began in 2018, but the government annulled the state joint venture on November 3, 2019, in response to protests by the local Potosí community members, who claimed the area was not benefiting from the economic activity and royalties were insufficient.

But the German deal may still have hope under the new administration of Luis Arce, who took office in in November 2020. On the campaign trail, the former Morales economic minister promised to revive the country’s lithium plans to supply 40 percent of world’s lithium needs by 2030 and generate $4.5 billion for the country annually through the creation of what would be Latin America’s first hub for the production of electric vehicles. 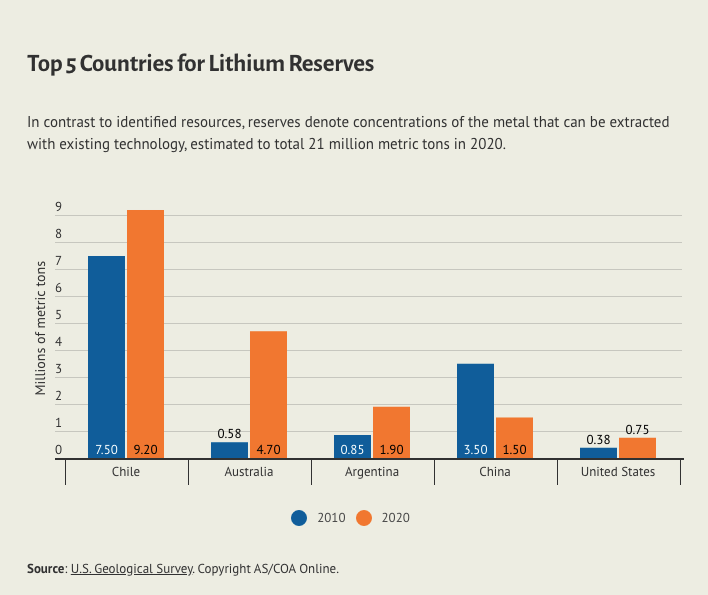 Chile currently has the world’s largest proven reserves, despite having half the resource potential of Argentina or Bolivia. In terms of total lithium content produced, it is second only to Australia, which first surpassed the Andean country in 2017. Chile’s production costs, however, are about a third of Australia’s, thanks to its convenient location with access to the Pacific and favorable conditions of the Atacama Desert, home to the first-ever, large-scale lithium-brine mine. Two companies have been operating in the Salar de Atacama since 1993, producing some 74,900 metric tons of LCE in 2017.

As one of the driest places on the planet, however, the mines’ reliance on water for extraction exacerbates the region’s water scarcity and threatens to diminish the lithium content of existing reserves. According to Harvard International Review, every ton of lithium extracted requires some 500,000 gallons of water, leading to mining activities consuming 65 percent of the Atacama’s water supply. But SQM, a lithium producer in the country, points to a much lower rate of water consumption of 5,944 gallons of fresh water per metric ton of lithium carbonate produced. Still, advocates and local communities are calling for the brine to be regulated as water—granting greater resource protections—rather than a mineral in the new Constitution, which Chileans voted to reform in an October 2020 national referendum.

Focused initially on its nuclear potential, the government has deemed the element a strategic resource of national interest since 1979. As such, projects are carried out through public-private partnerships. In 2015, then-President Michelle Bachelet created a National Lithium Commission to develop a strategy focused on the sustainable management of mineral resources, fiscal policy, and technological and industrial diversification. The commission’s recommendations led to an extension of the existing contracts with new terms in 2018, including a tax on the companies’ lithium sales between 6.8 and 40.0 percent depending on the sale amount, their commitment to invest 18 million in research and development, and the obligation to sell up to 25 percent of produced lithium at a preferential rate to specialized producers in Chile.

The administration of President Sebastián Piñera has also made it easier for foreign companies to invest in the sector, prompting new ventures roughly worth $2 billion, such as a new salar project in Maricunga, expansions of existing mines, and the creation of lithium processing and battery manufacturing plants.

In the meantime, legislators continue to propose policies that increase the mining companies’ contribution to the development of the regions in which they operate. In February 2020, for example, the lower house of Congress announced it was considering a bill that would impose an additional 3 percent royalty on the value of lithium extracted. Currently, large mining companies pay a corporate tax rate of about 27 percent, as well as a mining tax of between 5 and 14 percent.

While the Lithium Triangle typically hogs the limelight, there are other regional players either entering or expanding their presence in the lithium market. Brazil, for one, has been producing lithium since the 1970s from pegmatite rocks—the second most concentrated form of the metal, primarily for ceramics and glass. These mineral deposits are concentrated in the states of Ceará and Minas Gerais. Given its potential for nuclear development, the element’s import and export is controlled by the National Nuclear Energy Commission. While the country was producing an average 230 metric tons of lithium content between 2010 and 2018, production jumped 700 percent from 2018 to 2019 due to explorations fueled by the advent of electric cars. As of January 2021, plans exist to expand lithium projects in Minas Gerais.

Mexico is not currently a lithium producer, though it plans to enter the playing field with its Sonora project scheduled to begin production by 2023. The mine is expected to produce 35,000 metric tons of LCE a year to be mined from rocks. In November 2020, a senator from the ruling Morena party, Alejandro Armenta, introduced a draft bill to Congress proposing to nationalize the metal. The legislation would create a state entity that would regulate lithium mining. As of the end of last year, there were three lithium projects in the exploration phase in Mexico.

In February, the Peruvian Congress began to debate a bill to promote the exploitation of both uranium and lithium. A flurry of explorations for deposits of the metallic element led the country to identify 880,000 million tons of lithium in 2020—almost seven times as many resources as it had in 2019—mostly in hard rock deposits. The subject has already been a point of discussion for some presidential candidates, such as Rafael López Aliaga of the Popular Renovation party, who proposed turning the Puno region in Peru’s southeastern corner near Lake Titicaca into a lithium and battery production center. As the second biggest copper producer worldwide, the country benefits from a mature mining industry. 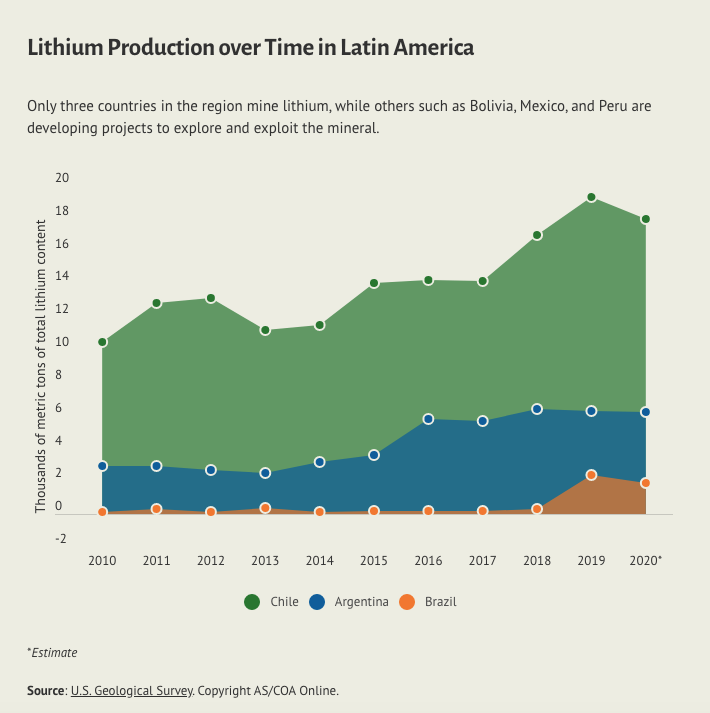