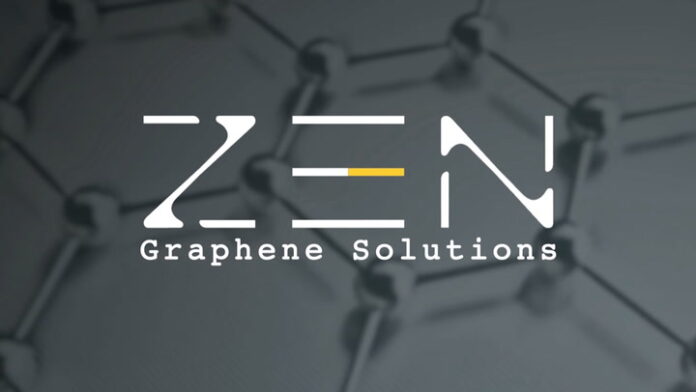 This study was recently published in the peer reviewed journal Carbon and utilizes an interfacial trapping exfoliation process which is spontaneous and driven by the spreading of graphene at a liquid-liquid interface between two immiscible fluids (e.g. oil and water) and thus lowering the free energy of the system. The article reported “the time to reach full emulsion for the Albany PureTM material was much shorter than for other graphite reference material (Figure 1). The paper also concluded that “the source of the graphite plays a role in the exfoliation in addition to the flake size”. This advantage will likely translate into a more efficient and economic exfoliation process as the company advances towards commercialization. Additional testing was also conducted to compare the purified East Pipe and West Pipe material and confirmed very similar exfoliation rates for the two pipes as shown in Figure 2 below.

Francis Dubé, ZEN CEO commented, “We have known for a long time that our material exfoliated into graphene faster and better than flake graphite but quantifying it so clearly was a significant confirmation. I want to thank Prof. Douglas Adamson at UConn for his excellent research!”

These results provide additional third-party confirmation that Albany PureTM Graphite exfoliates more easily than other commercially available graphite material and supports the results that were published by Dr. Yoshihiko Arao, Assistant Professor in the Department of Chemical Engineering at Tokyo Tech and reported in an October 16, 2018 news release. In this article, it was reported that the particle size was linked to the ease of producing graphene from graphite through exfoliation – the smaller the feed graphite particle, the easier to exfoliate. The researchers further concluded that, due to the size of its flakes, the exfoliation productivity of graphite derived from ZEN’s Albany PureTM Graphite performed up to 1500% better than the researchers’ reference flake graphite materials. Interestingly, in the UConn study, the ZEN samples had a slightly larger flake size than the other graphite samples, yet still showed faster exfoliation. The company surmises that the turbostratic nature along with the slightly larger d-spacing between the layers were the reason why Albany PureTM Graphite performed better in this study.

ZEN Graphene Solutions is also seeking advanced applied graphene-related research projects where ZEN could support this research by providing customized graphene materials and, in some cases, funding in exchange for some commercialization rights to be negotiated. Please submit your proposals in confidence to researchproposals@ZENGraphene.com.

ZEN is an emerging graphene technology solutions company with a focus on the development of graphene-based nanomaterial products and applications. The unique Albany Graphite Project provides the company with a potential competitive advantage in the graphene market as independent labs in Japan, UK, Israel, USA and Canada have independently demonstrated that ZEN’s Albany PureTM Graphite is an ideal precursor material which easily converts (exfoliates) to graphene, using a variety of mechanical, chemical and electrochemical methods.