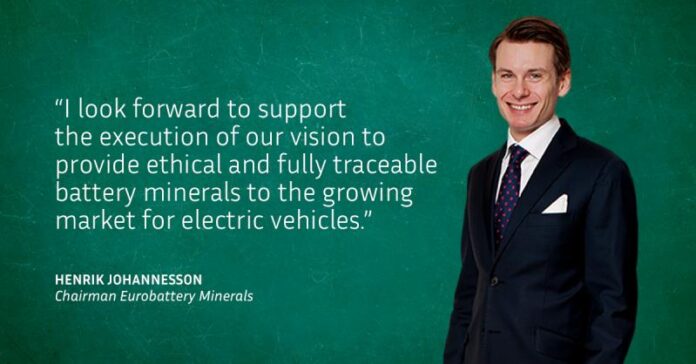 Stockholm-based Eurobattery Minerals AB (NGM; “BAT”), a growth company in the mineral exploration industry, welcomes Henrik Johannesson as board member and chairman of the board. He was elected at the company’s Annual General Meeting on the 17th of June 2020 and thus replaces Monia Benbouzid.

“We welcome Henrik to our team. The combination of his strategic knowledge and international experience will bring important value to the company in our continued expansion as the foundation for the European battery industry. As the chairman of the board he will play an important role over the coming years for the company’s continued development. We also thank Monia for her work and wish her all the best in her future venture”, said Roberto García Martínez, CEO at Eurobattery Minerals.

Henrik has a broad experience from previous board assignments. His experience spans from many different industries and markets.  Having started his career as a lawyer at Vinge he has held several management positions at Oriflame Cosmetics and Oriflame Global Management,  including Managing Director and Vice President for the company.

For the past 17th years he has lived and worked across most continents, including Mexico, Vietnam, Croatia, Iran, Turkey and Poland. In his roles he has held full P&L responsibility with focus on growth and new market entries. Further to this, he has also been responsible for several ventures in Africa and Latin America. Henrik is now based in Stockholm.

Henrik holds an LLM Master of Laws from Lund University and has studied business at Stockholm School of Economics as well as completed an Executive Education at Harvard Business School.

“I am thrilled to join Eurobattery Minerals. In my capacity as chairman of the board I am looking forward to working in close collaboration with Roberto and support the execution of our vision to provide ethical and fully traceable battery minerals to the growing market for electric vehicles”, said Henrik Johannesson.

In addition to Johannesson, Roberto García Martínez and Jan-Olof Arnbom were re-elected as board members at the meeting.

About Eurobattery Minerals
Eurobattery Minerals is a mining and prospecting company focused on battery minerals such as nickel, cobalt, copper and rare earth elements. Business activities and operations are conducted exclusively in Europe with a focus on Spain, Finland and northern Sweden. The company has two mining licenses and eight exploration licenses. The headquarters is located in Stockholm.