Grizzly Discoveries Inc., Edmonton, Canada, (TSXV: GZD) (OTCQB: GZDIF) (FSE: G6H) has announced that Geotech Ltd. has commenced an approximately 400 line-km VTEM™ (Versatile Time Domain Electromagnetic) and magnetic survey over its 100% owned, road accessible Robocop Property in Southeast British Columbia, near the hamlets of Grasmere and Roosville. The helicopter-borne VTEM™ survey will be flown at 100 metre line-spacing and will provide the first property-wide, high-resolution geophysical image of the Property.

The VTEM™ dataset will help to better define the geological model of the Property and to target conductive portions of the assemblage, both stratigraphic and vertical structural anomalies, particularly those that might be associated with sulphide minerals. The survey will be the first of many modern exploration techniques that will be used to explore and develop the Robocop Project.

The Property has yielded significant historical cobalt (Co), copper (Cu) and silver (Ag) results and presents an opportunity to discover battery and electrification metals as the world shifts to electric vehicles, sustainable practices and greener alternatives. The property is hosted within a similar geological setting to the Idaho Cobalt-Copper belt where conductivity (EM) and magnetic surveying techniques have been used previously to successfully guide drilling of prospective targets and assist in making new discoveries.

Grizzly anticipates being able to use data from the survey to gather a better understanding of the geology of the Project and to identify targets for further characterization and investigation later in 2021, leading to a planned summer 2021 drilling campaign.

Highlights for the Robocop Project 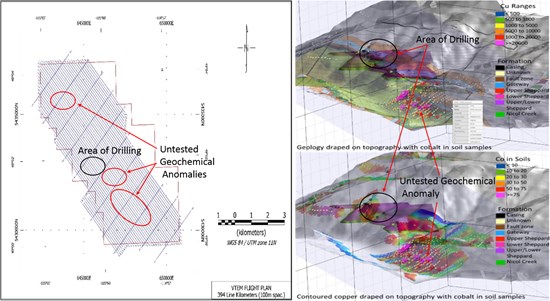 The VTEM survey is being conducted to search for and target conductive portions of the assemblage (often spatially related to sulphides including chalcopyrite), as both stratigraphic and vertical structural targets, with the purpose of providing additional targets for future work and drilling to those currently defined by previous drilling along with historical soil and rock sampling.

The macroeconomic outlook for battery metals such as Cu and Co remains strong with the ongoing shift to electric vehicles. It is estimated that the battery sector accounts for approximately 57% of current Co demand; this is expected to grow over the next five years to 72% and will require an additional 100,000 tonnes of Cobalt to meet demand.[1]

Brian Testo, CEO of Grizzly commented, “We are very excited to continue our 2021 exploration program at our Copper-Cobalt prospective Robocop property following our recently completed drilling campaign at Ket-28. Drilling results from Ket-28 are complete and we look forward to building of the results for a busy 2021.”

The technical content of this news release and the Company’s technical disclosure has been reviewed and approved by Michael B. Dufresne, M. Sc., P. Geol., P.Geo., who is the Qualified Person as defined by National Instrument 43-101 Standards of Disclosure for Mineral Projects.

Grizzly is a diversified Canadian mineral exploration company with its primary listing on the TSX Venture Exchange, with 90 million shares issued, focused on developing its over 156,000 acres of precious and base metals properties in southeastern British Columbia. Grizzly is run by a highly experienced junior resource sector management team, who have a track record of advancing exploration projects from early exploration stage through to feasibility stage.