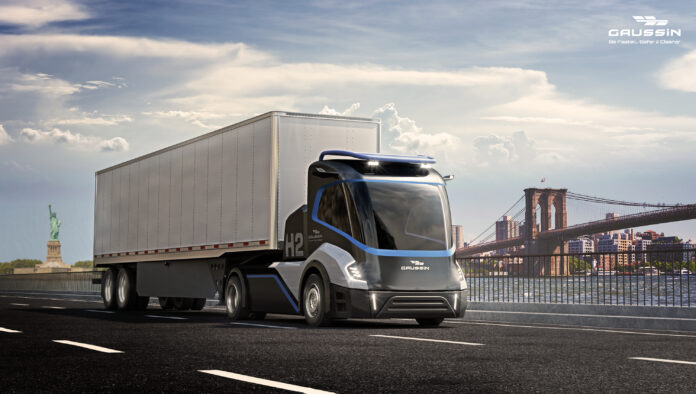 In April 2021, Gaussin launched the world’s first “skateboard” for class 8 tractor or straight trucks from 18t to 44t, hydrogen or all-electric, a rolling, versatile and modular platform designed for the various market players.

The solution is aimed at both traditional truck manufacturers and new entrants, as well as bodybuilders and autonomous navigation software players. More broadly, the skateboard targets all players wishing to have access to a hydrogen and electric platform for clean and intelligent transport.

Gaussin’s skateboard aims to become the reference platform in the road truck segment by developing a large community of reference, regional and commercial technology partners and by facilitating its integration through documentation, training and standardization of the various mechanical and software interfaces.

With its vertical integration capabilities, Microvast can provide a wide choice of different cell chemistries in its standard battery packs, which can fulfill the diverse technical requirements in terms of power, energy density and cycle life. The high-level modularity of the battery gives Gaussin great flexibility in the vehicle design. The excellent fast-charging feature and the high energy density of Microvast battery solutions would meet the surging demand from large logistics players to shorten the charging duration and prolong the charging interval.

For instance, the hydrogen version of the road skateboard is a hybrid system that uses highpowered batteries in combination with the fuel cell to provide power under certain conditions— but also to extend the skateboard’s range of up to 400 km using battery power. Page 2 sur 4 Specifically designed to address the critical constraints currently facing electric vehicle development, Microvast’s electric vehicle battery system solution paves the way for mass adoption of electric vehicles.

With its Clarksville, Tennessee facility scheduled to be operational beginning of 2023, Microvast will be able to supply Gaussin and its future U.S. licensees directly from its U.S. facility, which will produce cells, modules and assembled packs locally, making its supply chain more reliable and shorter, and continuing to build local ecosystems in every region of the world to support the group’s growth. A similar scheme is planned for Europe where Microvast will be able to supply Gaussin’s European requirements for the entire current and future product range from its Ludwigsfelde plant in Germany.

Microvast, Inc. is a technology innovator that designs, develops and manufactures lithium-ion battery solutions. Founded in 2006 and headquartered in Houston, TX, Microvast is renowned for Page 3 sur 4 its cutting-edge cell technology and its vertical integration capabilities which extends from core battery chemistry (cathode, anode, electrolyte, and separator) to battery packs. By integrating the process from raw material to system assembly, Microvast has developed a family of products covering a broad breadth of market applications.

Gaussin is an engineering company that designs, assembles and sells innovative products and services in the transport and logistics field. Its know-how encompasses cargo and passenger transport, autonomous technologies allowing for self-driving solutions such as Automotive Guided Vehicles, and the integration all types of batteries, electric and hydrogen fuel cells in particular. With more than 50,000 vehicles worldwide, Gaussin enjoys a strong reputation in four fastexpanding markets: port terminals, airports, logistics and people mobility. The group has developed strategic partnerships with major global players in order to accelerate its commercial penetration: Siemens Postal, Parcel & Airport Logistics in the airport field, Bolloré Ports and ST Engineering in ports and Bluebus for people mobility. GAUSSIN has broadened its business model with the signing of license agreements accelerating the diffusion of its technology throughout the world. The acquisition of METALLIANCE confirms the emergence of an international group present in all segments of intelligent and clean vehicles. In October 2019, the Group won the World Autonomous Vehicle Transport Competition “Category leader” – “Better energy and environmental sustainability”. Gaussin has been listed on Euronext Growth in Paris since 2010.