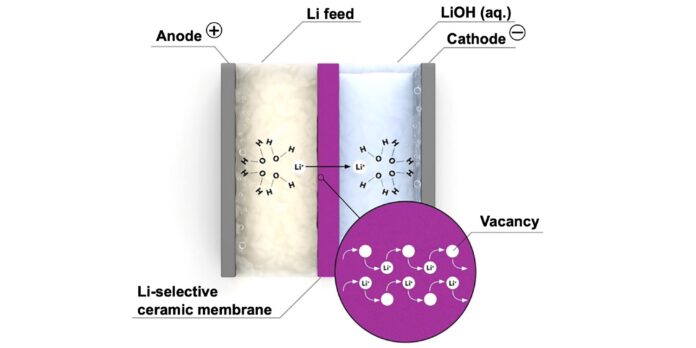 The specialty chemicals group Evonik wants to make the recycling of lithium from drive batteries of electric vehicles easier, more economical and more environmentally friendly. The ceramic membrane process developed for this purpose should be ready for the market in three to five years.

Evonik researchers are relying on lithium recycling in an electrochemical process with a ceramic membrane. According to the company, the process is already being tested in the laboratory on a trial scale.

At the end of the process, high-purity lithium hydroxide is suitable for the production of new lithium hydroxide suitable for the production of new batteries. Evonik says that this process will primarily be characterised by its high efficiency. The starting point is the black mass, which consists of a mixture of the cathode active materials. Materials such as cobalt and nickel are extracted during hydrometallurgical processing producing a leaching liquid containing lithium.

This electrochemical process is supposed to replace the kind of hydrometallurgical processing of lithium that has been common up to now. The new process should save water, energy and chemicals. In the German cities of Hanau and Marl, Evonik is now working on transferring the process from the laboratory to a larger scale. The recycling experts are confident that they will have developed the ceramic membrane process to market maturity in three to five years. This year, the prototype design will be tested with external partners, pilot modules will be created in 2023, and then the first larger-scale modules in 2024.

Elisabeth Gorman, lithium recycling expert at Evonik points out, “In a few years, many lithium-ion batteries will be coming to the end of their service life. As a result, there will be a sharp rise in the volume of spent batteries that can be used to recycle lithium.”

She explains that with the many new production facilities being set up in Europe for the mass production of electric vehicle batteries, this number is set to increase. She urges that legislation in the EU is needed: “The EU, in particular, is pressing for valuable raw materials to be re-used in the production cycle. That is already realistic for cobalt and nickel, but the recycling rate for lithium is less than 5 per cent at present.”

In China, where electric vehicles have been more commonplace for a longer period of time, battery reuse in second-life applications and recycling processes have been subject to several phases of government legislation to cope with the enormous number of batteries to be recycled.

Earlier last year, Evonik joined a consortium with four other companies, Forward Engineering, Lion Smart, Lorenz Kunststofftechnik and Vestaro last year to develop a brand-independent, lightweight battery concept for electric vehicles. The consortium set itself to create a light battery concept for BEV vehicles that is suitable for series production and based on unified assemblies and a cross-market component standard.