EMX Royalty Corporation, Vancouver, Canada, (NYSE American: EMX) (TSXV: EMX) (FSE: 6E9) has announced the acquisition of 37,500 hectares of mineral exploration permits in central Norway that cover the zinc-lead-copper-silver-gold occurrences and historical mines of the Mo-i-Rana district. The most notable deposit in the district is the Mofjell mine which produced 4.35 Mtonnes at 3.61% Zn, 0.71% Pb, and 0.31% Cu from 1928-19871. Over 200 mines and prospects with volcanogenic massive sulfide (“VMS”) styles of mineralization are located within the Mo-i-Rana project area (the “Project”), including ten former producing mines (see Figure 1).

The acquisition of the Mo-i-Rana belt is part of a broad initiative that EMX is executing in Norway, where it has been steadily acquiring and forming partnerships to advance a variety of projects, including polymetallic base metal deposits, orogenic style gold systems and “battery metal” (nickel-copper-cobalt-PGE) type deposits. Together with its various partnerships, EMX has become a leading explorer in the Nordic countries. In accordance with EMX’s royalty generation business model, the Company is seeking a capable partner to help advance the Mo-i-Rana project. EMX is planning to commence field work on the Project this coming spring and summer.

VMS style polymetallic deposits are developed in the Rana-Hemmes metallogenic region of Norway, which is also host to the prolific Rana Gruber iron mines as well as the nearby Bleikvassli Zn-Pb-Cu-Ag deposit, an EMX royalty property being advanced by Norra Metals Corp. (see Figure 2). This metallogenic area represents a tectonically displaced continuation of the Cambrian-Ordovician metallogenic belts in northeastern North America, which includes the Buchans and Bathurst VMS camps in eastern Canada, and also the Avoca VMS district in Ireland. As such, this represents one of the more prolific VMS belts in the world in terms of total production from its various mining districts, albeit now tectonically dissected and occurring along opposite sides of the Atlantic Ocean.

VMS, Carbonate Replacement Deposit (“CRD”) and skarn types of mineralization are seen in the Mo-i-Rana district. Deposits are hosted by a deformed 10 x 25 kilometer belt of bimodal felsic and mafic volcanic rocks and sediments. This belt of volcanic and sedimentary rocks includes the Mofjell Group and Plurdal Group, which host a variety of pyritic base metal deposits with variable, but poorly documented enrichments in precious metals. At least nine individual VMS horizons are known to exist at different structural/stratigraphic levels in the Mofjell group and were intensely deformed (post-mineralization) during the Caledonian orogeny (490-390 million years ago). Some of these zones are quite extensive and can be traced along trend for up to up to 20 kilometers (Ibid1).

In 2008, a partnership between industry, the Norwegian Geological Survey (NGU) and the local county administration was formed to investigate additional potential at Mofjell. This effort generated high resolution airborne geophysical data sets, as well as district scale mapping and geochemical sampling campaigns carried out by the NGU. These represent key data sets that EMX intends to utilize for further advancement of the Project.

Exploration upside exists at many of the historical occurrences, and only a portion of the nine individual VMS horizons have been tested to date. Most historical drilling was also shallow (i.e., less than 100 meters). In addition to the Mofjell occurrence itself, the most prospective areas are included in the Table 1.

In the summer of 2021, EMX will deploy field teams across the Mo-i-Rana belt to map geological features and collect and additional geochemical and geophysical data, as well as continue compilation of historical information while seeking a partnership for the Project.

Comments on Sampling, Assaying and Adjacent Properties. Samples and geochemical assays mentioned in this news release are reported by Norwegian Geologic Survey. EMX has not performed sufficient work to verify the properties’ historical drill results or production data but considers this information as reliable and relevant based upon independent reviews of data from multiple independent sources. Additional drilling and sampling would be required to confirm these results.

The Mofjell Mine and nearby mines and deposits discussed in this news release provide context for EMX’s properties, which occur in a similar geologic setting, but this is not necessarily indicative that the Company’s properties host similar mineralization.

Dr. Eric P. Jensen, CPG, a Qualified Person as defined by National Instrument 43-101 and employee of the Company, has reviewed, verified and approved the disclosure of the technical information contained in this news release. 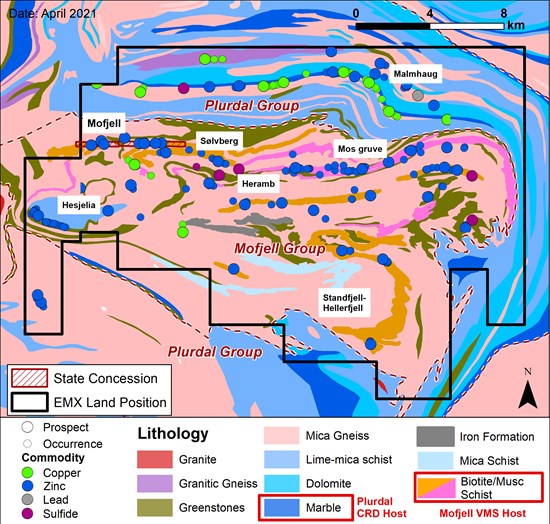 EMX is a precious, base and battery metals royalty company. EMX’s investors are provided with discovery, development, and commodity price optionality, while limiting exposure to risks inherent to operating companies. The Company’s common shares are listed on the NYSE American Exchange and the TSX Venture Exchange under the symbol EMX.