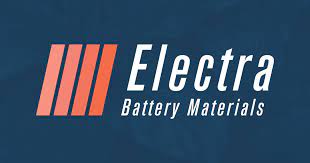 Electra Battery Materials Corporation has provided an update on its plans to develop a low carbon, fully-integrated battery materials park for the North American electric vehicle industry and announced the filing of its financial results for the first quarter ended March 31, 2022.

“Despite supply chain disruptions and inflationary price pressures caused by the lingering effects of the global pandemic and recent geopolitical developments Electra made considerable progress in Q1, advancing the construction of our expanded cobalt refinery,” said Trent Mell, CEO of Electra Battery Materials Corporation.  “Most notably, we received our Industrial Sewage Works permit, started construction of the solvent extraction plant, and received approval of our Closure Plan. Completion of these milestones paves the way for the commissioning of our refinery expansion in Q4 2022, consistent with our expected timelines.”

Mr. Mell added, “We have sustained this momentum into Q2 with our successful listing on NASDAQ, strengthening of our senior leadership team, and signing an offtake agreement for nickel and cobalt produced at our battery recycling plant starting in 2023. We anticipate building on this progress through 2022 and beyond as construction of the refinery is completed and we begin production.”

Electra has successfully kept the project on schedule to commence dry commissioning in December, despite global supply chain disruptions. Cost pressures have emerged from systemic inflation, constrained global supply chains and the sanctions on trade with Russia, increasing the average cost of project inputs, such as steel, copper, nickel and freight rates, all of which have put the original budget at risk. Labour and contractor rates are also higher with recent 8 to 9% wage settlements with construction trades, as well, a number of concurrent development projects in Canada have created a very competitive market for experienced trades. Based on trends in the market, management believes that the US$67 million capital budget could be exceeded by approximately 5 to 10%. The Company’s early decision to create an experienced owner’s team has helped mitigate some of these impacts and management believes the Company is well positioned to navigate a more complex landscape.