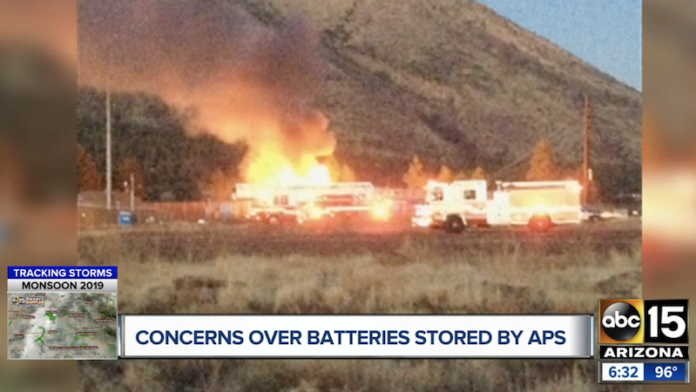 When a large battery used to power a neighborhood in Surprise, Maricopa County, Arizona, failed and began smoking last year, firefighters didn’t have a response plan for how to deal with the problem, which contributed to an explosion that injured several first responders, Azcentral.com reports.

That is one of the conclusions of a report released on Monday about the April 2019 explosion at the McMicken energy storage facility, owned by APS Arizona Public Service Co.

Several other things went wrong and led to the explosion, but the lack of a plan contributed to the injuries because firefighters opened a door on the facility about two hours after arriving on the scene, and two minutes later, the facility exploded. That sent eight firefighters and one police officer to the hospital.

APS officials said they will take the lessons learned from the accident to improve safety at future battery installations. The battery that exploded at McMicken was 2 megawatts. APS plans to install an additional 850 megawatts of batteries around the state.

“We see this as clearly a tragic equipment failure,” said Jacob Tetlow, senior vice president operations for APS. “We deeply regret the injuries to first responders. Our thoughts have certainly been with the first responders throughout the investigation.”

DNV GL Energy Insights USA Inc. prepared the report for APS, compiling information on the explosion from other analysis prepared for battery makers, firefighters and even Sandia National Laboratories.

APS released the report Monday to state utility regulators and made it public.

Four Peoria firefighters were the most seriously hurt. They all eventually were discharged from the hospital last year. In addition, four other firefighters and a police officer for the city of Surprise were taken to a hospital for evaluation of less serious injuries.

The battery, which is about the size of a small mobile home, was built by AES Distributed Energy Inc., using lithium ion cells from LG Chem.

“The emergency response plan provided by AES to APS did not have instructions on how to respond to a potential explosion or how to enter the system after the fire suppression system had been discharged,” the new report concludes.

Why did the building explode?

The problems at the facility started at about 5 p.m. when a faulty battery cell had essentially shorted out. The small building was packed with battery modules in racks from the floor to the ceiling. The faulty battery cell overheated, and that damaged other modules nearby.

Lithium ion batteries that fail in this manner enter something called “thermal runaway,” which is essentially a build up of heat that can lead to a fire.

So even though the fire-suppression system discharged, the batteries continued to overheat but with no flames. The system had no barriers between battery modules to prevent one overheating module from spreading to the next and creating a cascading effect, according to the report.

This led to a build up of flammable gasses in the building. Those gasses exploded when the firefighters eventually opened the door and entered. The report says the gasses made contact with a heat source or spark.

“At the time of the development of this plan, none of the (battery) suppliers (including AES and LG Chem) had conveyed that a large flammable gas hazard or cell-to-cell and module-to-module cascading thermal runaway was possible,” the report said. “This kind of communication breakdown must be remedied to avoid future incidents.”

The report concludes that neither APS or the first responders fully understood the risk.

“The emergency response to the (battery) incident was hindered by several factors, including an insufficient understanding by all parties as to the hazards posed by unmitigated cascading thermal runaway inside an energy storage system,” the report said.

APS will continue with battery plans

Officials at APS said they already are taking the lessons learned from the accident to improve communication with first responders, and that they will continue with plans to install many more batteries in Arizona.

“One of our corrective actions is to increase the communication between the utility and the first responders,” Tetlow said. “That is just one part of the equation.”

APS has ambitious plans to add batteries across Arizona, which officials say is key to increasing renewable-energy sources like solar and wind on the grid. APS plans to get 45% of its energy from renewable sources by the end of the decade and be carbon free by 2050.

“That’s our goal and that’s what we are working toward,” Tetlow said.

APS last year announced plans to install about $1 billion in dozens more batteries like the one that exploded. The batteries will capture and store surplus energy, mostly from solar power plants and rooftop solar panels, and use it in the evening when the sun sets and solar panels stop making electricity.

“Between solar and some wind, you need storage to make non-dispatchable renewables work on our system,” Tetlow said. “We need the ability to bottle up the sun during the peak of the day and shift it to later in the day.”

He said two other batteries APS has in Arizona remain shut down while the company adds additional safety features to them, but APS will move ahead with further battery installations.