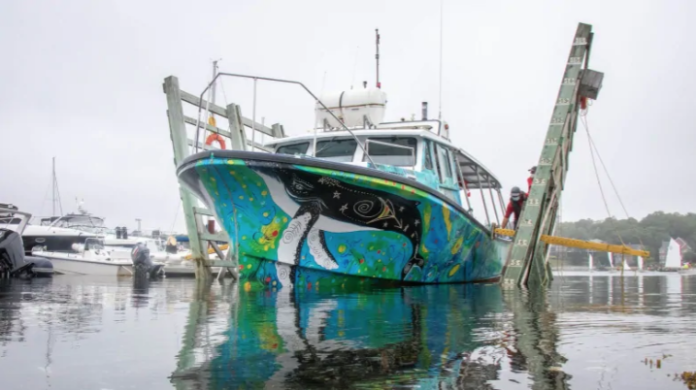 A lithium-ion commercial passenger boat that can take up to 25 guests out deep sea fishing in the waters around Halifax, Nova Scotia, is the first such boat to gain safety approval from Canada’s Marine Technical Review Board, Plugboats.com reports.

Most recently a diesel powered whale watching/harbour tour boat, the 44 footer is owned by Ambassatours Gray Line and was converted by Glas Ocean Electric with financial assistance and grants from a variety of public and private sources, including Nova Scotia Power and Canada’s National Research Council.

Along with the propulsion makeover she received a bright hull mural depicting various ocean animals designed by world renowned indigenous artist Alan Syliboy of the Mi’kmaq (pronounced meeg mah) First Nations. The vibrant images, inspired by Mi’kmaq petroglyphs, were made into a hull wrap by Mattatall Signs. The new name of the boat, ‘Alutasi‘ is Mi’kmaq for ‘a boat that guides to the best fishing’

The launching of the boat also paid tribute to the Mi’kmag. Instead of the traditional bottle of champagne being broken across the bow, she received a smudge blessing in a traditional Water Protector Ceremony led by elder Dorene Bernard.

It took 17 months for the refit. The team was led by Dr. Sue Molloy, who has been CEO of Glas Ocean Electric for the past four years and is well known internationally for her work in the marine renewable energy sector.

She also does research work on tidal power in her role as an Adjunct Professor at Halifax’s Dalhousie University, also home to the research team of  Tesla’s lithium battery guru Jeff Dahn.

Speaking about the safety certification for a lithium-ion commercial passenger boat, Dr. Molloy told Bill Spurr of the Halifax Chronicle Herald “It was quite an involved process because Transport Canada has strict regulations around safety when passengers are involved. We could’ve just gone with a fishing vessel and had fewer rules to deal with, but because this is a passenger vessel there is a lot more stringency.”

The boat is a Cape Islander, a well known style of fishing boat in Eastern Canada, with a distinctive step up to the bow. Glas Ocean worked with a variety of partners, including E.Y.E. Marine Consultants, Canadian Maritime Engineering, Sterling PBES Energy Solution and Danfoss Editron to design and install a parallel hybrid electric system that incorporates the existing diesel motor.

There was a big desire for an all electric system, but hybrid was chosen partly for safety back-up reasons and also because the Alutasi has to navigate two very different types of waters each trip – those of the Halifax Harbour and the deep fishing waters of the Atlantic Ocean itself. The diesel will be used for fast transit in the harbour and the electric motor for the majority of each trip.

One of Glas Ocean’s main goals is to show people the potential of electric boats. The owner of the boat, Ambassatour Gray Lines, has a significant fleet and Molloy is confident this will show them that for other sightseeing boats they can “do a tour in the morning, charge up  and do another tour in the afternoon.”

Talks are underway with one of the funders, Nova Scotia Power, to put Level 2 and Level 3 chargers on the city’s docks for all electric boats.