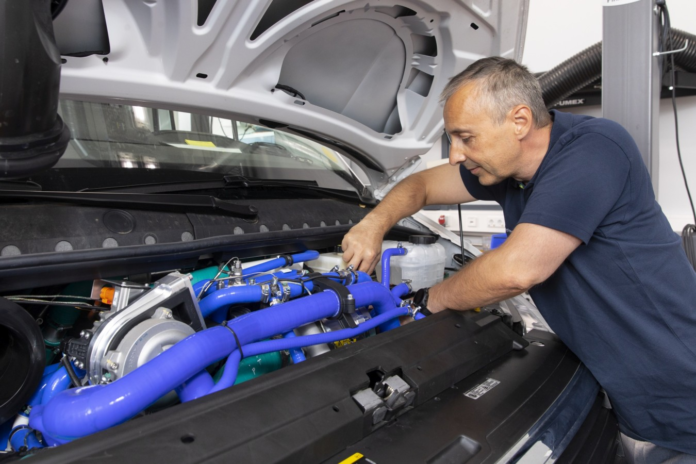 Bosch has equipped two vans with fuel cell technology and started test operation on the road. The partner in the project is the company Abt eLine, which converted the vehicles together with Bosch Engineering. Bosch will also bring the FC transporters to the IAA Transportation next week.

The technical basis of both vehicles is formed by “purely electrically driven transporters that are freely available on the market”, as the company writes in a statement. According to the photos provided, the vehicles in question are the VW e-Crafter and the MAN eTGE. “With the two fuel cell vans, we are expanding our understanding of the system and showing that the fuel cell can also be a suitable drive solution for light commercial vehicles,” expresses Dr Markus Heyn, Bosch board of management member and chairman of the Mobility Solutions division.

According to the company, the developers used Bosch components almost throughout the fuel cell system. A so-called Fuel Cell Kit was used, which comprises the stack, the anode supply module including hydrogen metering valve and recirculation blower, the control unit, the electric air compressor and storage components as well as a large number of sensors. During the conversion, the development team then replaced the batteries including peripherals of the two e-transporters with the fuel cell, five storage tanks for a total of over ten kilograms of hydrogen and a smaller battery.

“Accommodating the fuel cell components in the available installation space was a major challenge,” explains Dr. Uwe Gackstatter, chairman of the Bosch Powertrain Solutions division responsible for the project. Among other things, partner ABT eLine adapted the cooling system, the vehicle control system and the electrical system; Bosch designed the fuel cell system, integrated it into the vehicle together with the hydrogen storage system and developed the associated control system.

After the necessary technical tests, the vehicles have been granted road approval. According to Bosch, the project is already providing important findings: “even loaded, the vehicles can travel up to 540 kilometers and are fully refueled again in six minutes.” For fleet operators whose transporters cover particularly long distances during the day and return to the depot in the evening, the fuel cell could thus be a good supplement to the battery-electric drive in the future.

Bosch will now also bring both FC transporters to the IAA Transportation in Hanover. There, the company wants to offer rides to make the test vehicles tangible for everyone.

Basically, Bosch wants the project to pave the way for developing further FC components to market maturity. “We need as much data as possible from real driving operations to develop the system further,” says Gackstatter. Thanks to the cloud connection, the two test vehicles now delivered this data in real time to the developers’ computers, supplementing the measured values from the test benches. In his view, however, further steps are needed for the breakthrough of fuel technology: “Industry and politics must work together to remove obstacles to hydrogen technologies,” Gackstatter added. Among other things, the development of a tank infrastructure and the production of green hydrogen in larger quantities remain tasks that can only be solved together.

In 2021, Bosch recorded an order volume of over ten billion euros in the field of electromobility for the first time. On the heels of this announcement, the supplier announced in May 2022 that it would offer further hydrogen components in the future and also want to enter into the development of components for electrolysers. This year, Bosch wants to start series production of fuel cell drives for trucks, among other things. Heyn said in May: “At the Bamberg location, we want to have produced stacks with one gigawatt of power by the middle of the decade. By 2030, a fuel cell truck should cost no more to run than a diesel – that’s our goal.” Bosch had increased its investments in mobile fuel cells again in May – to almost one billion euros between 2021 and 2024.