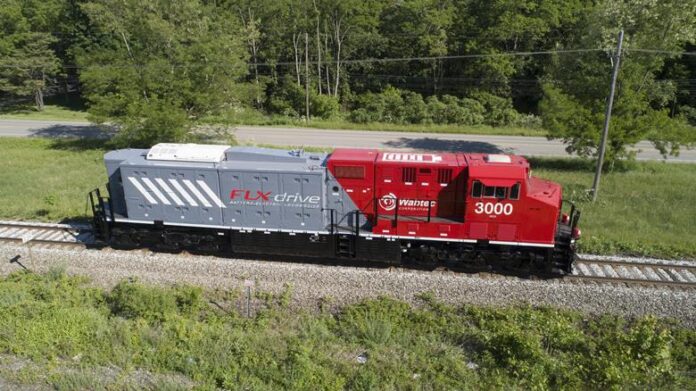 Wabtec Corporation has started conducting factory testing at its Erie plant of a prototype 4 400 hp battery locomotive, ahead of trial operations with BNSF Railway that are planned to take place in the final quarter of this year, Railwaygazette.com reports.

Wabtec Corporation is an American company formed by the merger of the Westinghouse Air Brake Company and MotivePower Industries Corporation in 1999. It is headquartered in Pittsburgh, Pennsylvania, US.

The BNSF Railway Company is the largest freight railroad network in North America. One of seven North American Class I railroads, BNSF has 42,000 employees, 32,500 miles of track in 28 states, and more than 8,000 locomotives.

BNSF and GE Transportation (now Wabtec) began development of the battery-electric locomotive in 2018, supported by a grant from the California Air Resources Board as part of its Zero & Near Zero-Emission Freight Facilities programme. The BNSF prototype is fitted with a lithium-ion energy storage unit with around 20 000 cells containing a combination of nickel, manganese and cobalt.

While BNSF and Wabtec have previously tested a battery shunting locomotive, this will be their first test of a main line design. Testing is to be undertaken on a 560 km route in California. The battery locomotive will operate in multiple with conventional diesel-electric locomotives between Barstow and Stockton, where a charging station will be installed at BNSF’s Morman Yard.

While the fixed charging station will provide an initial charge, the locomotive has been designed to capture kinetic energy through dynamic braking every time the train slows. The locomotive will use an advanced version of Wabtec’s train energy management software to look at the route ahead and calculate how to best use the available power to reduce the train’s overall fuel consumption. Operation on battery power in yards will also enable the other locomotives to idle or be shut down, reducing local emissions and noise.