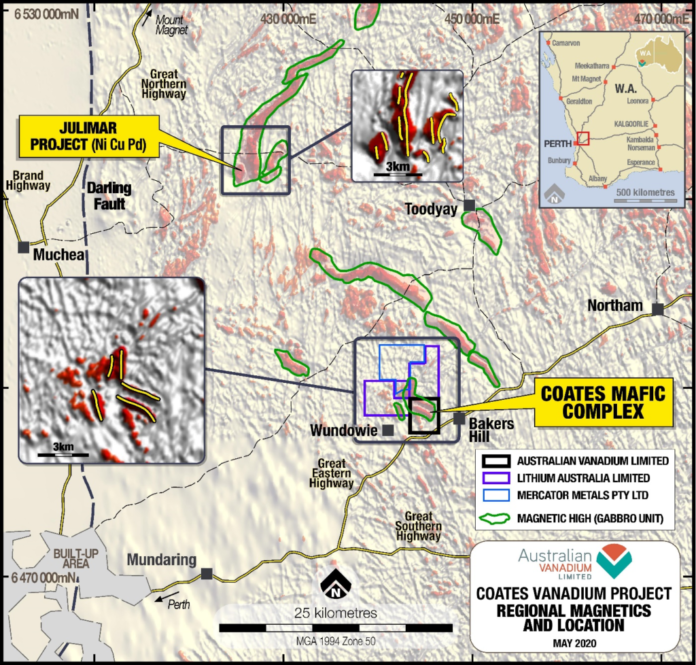 The companies said in a media statement that they were inspired by Chalice Gold Mines’ recent discoveries of nickel, copper and platinum-group elements (PGE) mineralizations at the Julimar project, which is near the Coates project.

Lithium Australia managing director Adrian Griffin said there were similarities between the Julimar and Coates projects. “The recent discovery of significant nickel- copper-PGE mineralisations at the Julimar Project by Chalice Gold Mines highlights the potential for additional discoveries in similar geological environments and the Coates Mafic Intrusion, located only 29 kilometres away, provides a tremendous opportunity,” he said.

Over the past months, Chalice Gold has made a number of high-grade discoveries at its greenfield Julimar project, which led to the company receiving strong interest from investors and raising a $30-million capital investment to expand its explorations.

Australian Vanadium managing director Vincent Algar said, “The discovery of nickel-copper-PGE at the Julimar Project has generated a lot of interest in the Western Yilgarn, and the strategic alliance announced today is intended to streamline exploration processes through seamless and efficient use of personnel and capital.”

The combined tenement package will cover a 59 kilometre square area, which stretches across the entire Coates Mafic Intrusive Complex.

Each company will cater for their own costs, including rents and rates, with the tenements posing an opportunity for a joint venture development or combined sale.