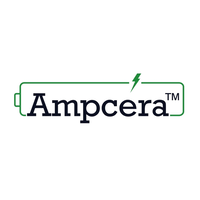 Ampcera Inc., Tucson, Arizona, an innovator in solid electrolyte technologies, today announced a low-cost flexible solid electrolyte (SE) membrane technology for solid-state batteries (SSBs). This new technology marks another leap forward in the commercialization of next-generation SSBs. Unlike conventional lithium ion batteries (LIBs) that include a flammable liquid or gel polymer electrolyte, SSBs use a safe SE and promise to double the driving range of electric vehicles when loaded with the same weight of batteries.

Performance and cost are the bottlenecks in the commercialization of SE technology and SSBs. To address them, Ampcera has been developing a scalable SE technology, and has filed multiple U.S. patent applications and an international PCT patent application on its flexible SE membranes, a low-cost manufacturing method, and the corresponding SSBs. Some key features and benefits of this new technology are highlighted below.

“We are now expanding our team to scale up this technology and further integrate it in solid-state lithium battery cells,” said Dr. Hui Du, co-founder and CTO of Ampcera. “With increasing profits from sales and additional support from our investors and the U.S. DOE SBIR program, Ampcera is committed to accelerating the commercial success of this technology in the coming years.”

About Ampcera Inc.Ampcera is focused on developing and commercializing high-performance solid electrolyte materials and scalable manufacturing processes for next-generation lithium batteries through partnerships with major automotive OEMs and battery makers. Ampcera is headquartered in the Silicon Valley in California with a research and development laboratory located in the Tucson Tech Park in Arizona.